On Monday we woke up to the birds singing, the breeze wafting and the sun shining.   This was the day that we decided that we would have breakfast out.  We ended up at the Poipu Shopping Village and had breakfast at ‘Poipu Tropical Burger’, a restaurant that features much more than just Burgers on their menu.  They opened early in the morning (6:30 AM) which was good since our bodies were still somewhere between California Time and Hawaiian Time.  We both ordered the French Toast made with Portuguese Sweet Bread.  It was egg battered and then dipped in cornflakes and served with diced Pineapple, butter and maple syrup. My preference for syrup would have been Pineapple or Coconut, but Maple is what was served and it was good.

After breakfast we made a stop at Whaler’s which is similar to the ABC Stores which are all over Hawaii.  They have almost everything from suntan lotion to breakfast, lunch and dinner items.  You can buy beach towels and mats, drinks, chocolates, coffee and then some.  After our perusal of Whaler’s we went back to our condo and lazed out on the balcony until it was time to go to the Farmer’s Market in Koloa.

We were told that we should get to the Farmer’s half an hour before it opened because there are always a lot of people and the vendors sold out quickly.  Since it was at the ball field in the town of Koloa, a couple of miles straight up the road from Poipu we decided to stop and check out Koloa first.  Koloa is billed as the world’s largest small town.  The business district is about three blocks long and has many types of shops including two full size markets, a deli, art galleries, ice cream stores and a real estate office.

Since we had an early breakfast, we decided that we should eat lunch while waiting for the Farmer’s Market to open, so we opted for the deli.  Ev had macaroni salad, an Hawaiian favorite and I had a Chicago Dog, another strange choice for Hawaii, but what the heck? Chicago Dogs comes with tomatoes, usually peperoncini, mustard and onions.  We still got to the Farmer’s Market half an hour before it opened and we weren’t allowed in until the official opening.  It was well worth the wait as there were many vendors with fresh salad greens, tomatoes, tropical fruits and chilled coconuts with straws in them to drink the Coconut Water inside.  In addition to the vegetables and fruit that I bought, I also purchased a couple of sprays of baby orchids which lasted for the whole ten days that we were in Hawaii.  They added the right degree of atmosphere to our dining room table and meals that we enjoyed there.

One thing that we didn’t know and will be helpful to those traveling and wishing to shop at the Farmers Markets is that plastic market bags have been banned and people have to bring their own bags to the Farmers Market.  That made it pretty difficult, because I didn’t know this until I had gone in, so had to rely on what I could carry.  Fortunately, some of the produce was already bagged and I just stuffed what I bought that wasn’t bagged into the bagged items.  So, if you go to the Farmers Market when you are there, do bring tote bags with you.  Even at the regular markets which give paper bags, you may have to pay for the bag, so if you can bring your own that would be good.

After making our purchases at the Farmer’s Market we headed back into the business district of Koloa and went to the Big Save which is the largest market in that area.  The meat department had many varieties of poki which is usually spicy, marinated raw fish.  In addition to that, they had freshly prepared sushi.  We picked up a large package of Caterpillar Rolls and some Papaya Seed Dressing along with Banana Bread for breakfast and chocolate brownie bites for dessert and of course soft drinks.

We headed back to the condo to put away our purchases and to enjoy some more of the Hawaiian atmosphere, the breeze and the sunshine.  For dinner that night, we had the Caterpillar Roll, a salad made from butter lettuce purchased at the Farmer’s Market along with Avocado and Papaya.  The salad was dressed with the Papaya Seed Dressing.  Papaya Seed Dressing is a little on the sweet side, but it is something that we always enjoy when we are there and I always bring home a package of the dried dressing that we can reconstitute at home.  It is on the order of Good Seasons, except that instead of adding vinegar and oil as in Good Seasons, you just have to add white vinegar and water.  Therefore, it is a low calorie dressing packed with flavor.

After dinner and about an hour before dusk, we headed down to Makahuena Point, (just a couple of blocks from where we were staying) to catch the sea birds coming in to roost.  We ended the day by spotting the swiftly flying Hawaiian Petrol, a Wedgetail Shearwater and a Newell’s Shearwater.  We constantly had to have our eyes on the flight path in order not to miss these birds as they suddenly appeared as out of nowhere and just as quickly disappeared.  As we are avid birders it is always a thrill to be able to see these birds as they make their way in for the night.

As the sun set we headed back to our car and to our condo for a relaxing evening listening to the surf and enjoying the gentle Hawaiian breeze.  Tomorrow’s blog will include a description of our jaunt to Hanapepe to look for the rose-ringed parakeet and of course about the food that we ate.  Don’t forget to check back! 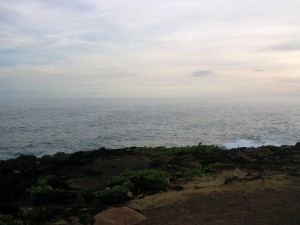