Days Three and Four of our Basics Culinary Camp were devoted to the preparation of protein products and starch accompaniments.  Day Three covered meat and potatoes and Day Four covered Poultry and Grains.  Since one of our students was a vegetarian, we also included tofu products.  The meats that were prepared were ground beef, brisket and lamb.  The potatoes that the students made were Mashed Potatoes, Potatoes au Gratin and Potato Pancakes (Latkes).
Two groups of students prepared the ground beef with one making meat loaf and the other one making meatballs.  The meatball group got quite creative and stuffed their meatballs with cubes of cheddar cheese.  These were quite good and went over very well with all the students, except for our vegetarian.  The brisket was cut up and made into Beef Stew which contained an assortment of vegetables as well as potatoes.  The grilled meat that we made was leg of lamb which we cut up and marinated in a lemon, basil, garlic and olive oil marinade.  The lamb was placed on skewers with mushrooms, tomatoes and bell peppers and then grilled on stove top griddles.
The Potatoes Au Gratin lagged behind schedule and we had to put off serving them until the next day.  The Potato Pancakes were a big hit and were served with the Lamb Skewers.  Our Vegetarian made Tofu Kabobs which were also a big hit.  A green salad was served along with the meat and potato dishes.

Day Four was Poultry Day and was rather an intensive day.  On the menu was Roasted Chicken, Chicken Cacciatore, Chicken Jambalaya and Turkey Pot Pies.  The grains were Sweet Potato Risotto (Rice), Polenta with Four Cheeses (Grain) and Mushroom
Couscous. (Grain)  As one can see, we also managed to include more vegetables in both the meat and poultry menus. The Roast Chicken was an easy version with the chicken being marinated for several hours and then baked at very high heat for a short period of time.  This gave us a juicy chicken with a very crisp outer covering. (skin)  The chicken was enjoyed by everyone.  The second recipe was cacciatore and contained tomatoes and is Italian in origin.  The Jambalaya has its origins in the Southern United States and maybe goes even further back to Africa.  The turkey pot pies were made with turkey breast which allowed a short baking time. The pot pies can also be made with thighs which would probably be more flavorful, but there was also a time constriction.  The Sweet Potato Risotto, Polenta and Couscous were very well received.  There was so much to eat that the students took their Turkey Pot Pies home as we made individual ones. 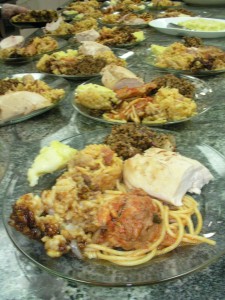 Two of the girls finished their recipes early and made cookies for dessert for everyone. All in all, the students enjoyed the preparation and the consumption of their labors even more.  Many of the students reported back that they made some of the dishes at home and were going to try out even more.  Most children and teens love to cooks and are more likely to be willing to try unusual dishes when they make the food themselves.