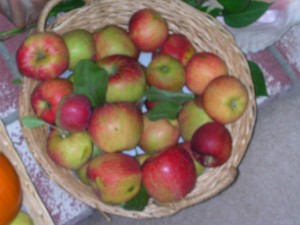 We have an apple tree that produces amazing quantities of apples.  It has done this ever since we planted it some twenty years ago, even when it was still a small tree.  Last year I think I gave away about 200 hundred pounds of apples and still had plenty to use.  When the apples are allowed to mature and ripen on the tree each one can weigh well over half a pound.  I tend to start picking them in August when they haven’t obtained their ripest point but are great for pies and other baked products.  This year so far our freezer has been stocked with Apple Turnovers, (one of our favorites) along with Apple Pastries made with pie crust.  There are apple slices all ready to turn into a pie and we have apple sauce.

So far this later summer and very early fall I have made 9 loaves of apple bread.  We have already consumed three loaves and I gave away three loaves to my grandchildren and will take one to my Parent/Child Pasta Class tomorrow to serve to the early birds. I have a wonderful recipe that started out as a zucchini bread but which I have turned into a generic model for fruit bread.  The basic ingredients remain the same, but I vary the amount and type of sugar used, depending on the sweetness of the fruit.  If you use bananas, you can cut way down on the sugar, but if you use something that is not inherently sweet more sugar may be necessary.  I also use half the amount of oil or butter that the original recipe used.  It still stays fresh for a long time and remains moist for eating, but cuts down on the calories from fat. 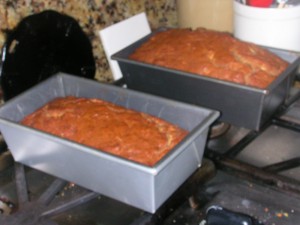 Hot out of the oven Apple Bread

This last time when I made the Apple Bread, I used 50% more fruit than the recipe called for but still had shredded apples left over.  So for breakfast the next day, I decided to make Apple Fritters.  They are very simple to make and satisfy that craving for doughnuts that some of us get every now and then.  Apple fritters can be served as a dessert with powdered or cinnamon sugar sprinkled on them or for breakfast with maple syrup as we did.  If you need something else to go along with the fritters maple flavored sausage or apple smoked bacon would be perfect.  For the Apple Bread Recipe please see ‘Breads’ under the ‘Recipe Section’.

The recipe I used for the fritters called for one egg beaten with 2/3 cup of milk and one teaspoon of vegetable oil.  In addition, there was one cup of flour, 2 tablespoons of sugar, 1 teaspoon of baking powder and a dash of salt.  I also used 1/2 teaspoon of cinnamon.  Add the dry ingredients to the wet ones and combine just to mix.  (Do not over mix!)  Once all the ingredients are mixed add the shredded fruit (2 cups) and stir to combine.   Drop by the tablespoon into hot oil (about 350-375 degrees) and cook until a deep golden brown on all sides.  This recipe can also be used for pancakes.  Just heat a thin layer of oil (or oil combined with butter) in a skillet and drop the fritter mixture by the tablespoon into the skillet.  Use the back of the spoon to slightly flatten the mixture.  Cook until golden brown, then carefully turn over with a spatula and cook the other side until golden brown.  Serve hot with maple syrup or powdered or cinnamon sugar. 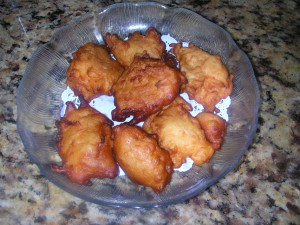 These are just two of the ways in which apples can be used and enjoyed.  There are many types of apples available today and there are hundreds of ways in which they can be used, including just plain old eating.