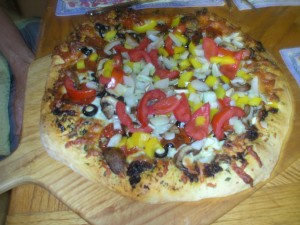 Pizza is on the menu quite often in our household as it is a favorite as it probably is in most households.  The Pizza resaturants probably don’t like us too well, because most of the pizza that is eaten in our home is made in our home, thus not providing business for the take-out places.  But we do provide business for the markets and Italian Deli where our ingredients are purchased.  This week’s pizza was made with sun-dired and fresh tomatoes instead of the usual canned crushed tomatoes that I use most frequently.  The dough was made mid-afternoon and left to raise up for about an hour and a half.  The raising time depends on the heat of the day and the quality of the yeast used.  The Pizza was baked on the Pizza Stone which I keep in my bottom oven.  About 45 minutes before baking the Pizza, I turned the oven on to 500 degrees to heat up the stone. 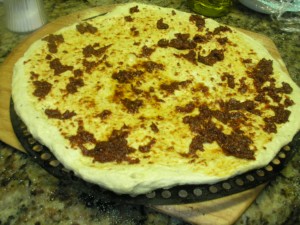 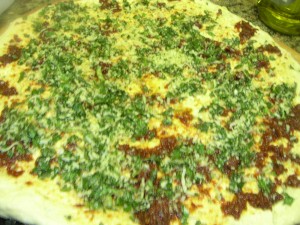