CHANUKA – THE FESTIVAL of LIGHTS – Feasting On Latkes 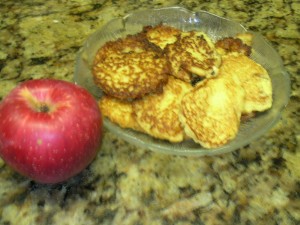 It is time for the Winter Holidays which include Chanukah, Christmas and New Years.  Chanukah usually falls before Christmas and is celebrated by Jewish families around the world.  It commemorates the rededication of the Holy Temple in Jerusalem at the time of the Maccabean Revolt of the 2nd century BCE.  When the Maccabeans recovered the temple from the Syrians, an oil lamp was lit to rededicate the temple.  The oil that was found was only enough to last for one day, but miraculously it lasted for eight days and nights.  Hence, Chanukah is celebrated for eight days, with the lighting of one candle the first day and one additional one for each of the succeeding days.  The total number of candles in all on a Menorah, the candelabra which is used at Chanukah, is nine.  The ninth one is called the Shamus and is used to light the other candles.

Because oil is involved with the rededication of the temple, foods that are traditionally served at Chanukah are often fried.  These include Latkes (Potato Pancakes) and Jelly Doughnuts.  Latkes are usually made from white Potatoes (Russets are best) but in recent times they have also been made from sweet potatoes, zucchini, and even cheese.  Latkes are traditionally served with Sour Cream or Apple Sauce.  Recently, for a change I tried making the Latkes with Apples.  Apple Latkes do not need Apple Sauce to be eaten with them, but they are good with Cinnamon Sugar or Whipped Cream.
They can be served as an accompaniment to a meat dish or they can be served for dessert or even for breakfast.

When making Potato or Apple Latkes, you want to be sure to squeeze out all the excess moisture from the grated potato or apple.  If they are too wet, the latke will not hold together when frying.  Potatoes and Apples, like people, can vary.  Some may have a lot of moisture and others may be dry.  You will have to gauge it for yourself after the fruit is shredded.  The apples on our tree do not have a lot of water and therefore, there was none to squeeze out.  But the riper the fruit gets, the more moisture that is released from the cells so you just have to judge the water content by feel and look.

The best kind of apples to use for the Latkes would be Granny Smith or Pippins.  These varieties are not too sweet and allow you to add sweetener to your taste.  They are perfect not only for latkes but also
for pies or turnovers.

Whether or not you celebrate Chanukah, try the Apple Latkes for yourself.  They make an excellent side dish or breakfast item and are a good way to use excess apples.

2.         Shred the Apples and Zucchini using the small holes on a hand grater.

3.         To shred the Potatoes in a Food Processor, follow the procedure below:

5.         Add the remaining ingredients to the Apple and Zucchini; mix well. 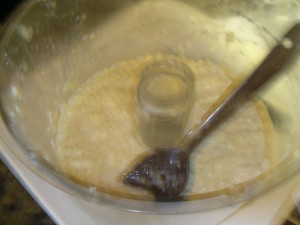 Shredded Apples in Processor Bowl, combined with other ingredients 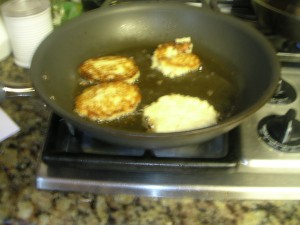 7.         Carefully drop the Apple mixture by the tablespoon into the hot oil and fry until 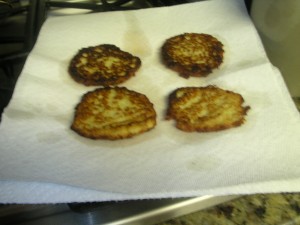 Blot the excess oil off on paper towels

9.         Serve with Cinnamon Sugar or Whipped Cream while still warm or as an accompaniment

for a meat dish.