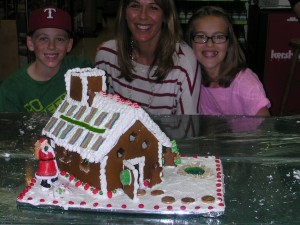 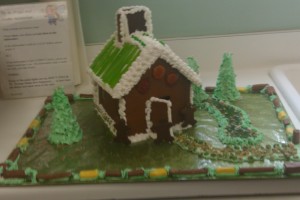 Saturday, Deceber 10th, was our 23rd Annual Gingerbread House Event at Let’s Get Cookin’ in Westlake.  The pictures posted here are from that event an also the Houses that I did  for the Gingerbread Event at the Wellness Center in Westlake. 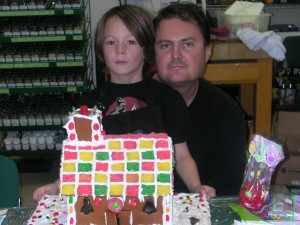 The day started at 10:30 AM with introductions of the staff and the students.  The students were presented with a demo of the process of making the Gingerbread Dough, Rolling, Cutting and Baking the House parts.  After the demo the Parent/Child Teams were each given a tray with House Templates and cutting tools.  The Dough was made for the students and each team was given half a batch of dough to start with.  The students rolled out the Dough, cut out their parts and then delivered them to the ovens where the staff watched over them.  Once the students were finished with their first batch of dough they were given a second batch and proceeded to cut out the rest of their houses and bake them.  At this point we broke for lunch. 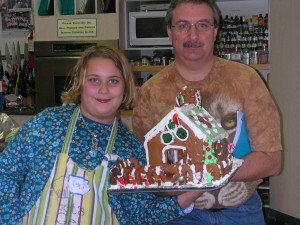 After lunch we presented another demo which included how to make the frosting, filling and using the decorating bags and constructing the house.  Students were warned not to use too much frosting and to keep the roof decorations light.  The students were also told not to put the roofs on until the side and end pieces had dried for at least 20 minutes or more. 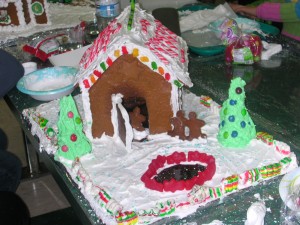 Finished House with Pond and Trees

At the end of the day, each Parent/Child team went home with a full size Gingerbread House that they had baked, built and decorated.  All in all, everyone had a good time and went home with the knowledge to be able to build their own houses at home in succeeding years. 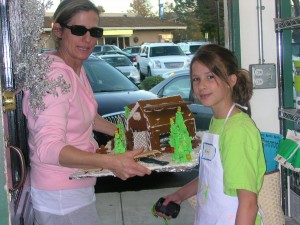 Out the Door and on their Way Home with their House