Saturday, April 7, 2012 is National Coffee Cake Day.  The reason this cake is called Coffee Cake is not because  there is coffee in it as an ingredient, but because it is meant to be eaten with a cup of coffee as the beverage.  This is a good cake to have for breakfast because it contains eggs, sour cream and butter.  The eggs and sour cream provide protein and the butter of course adds flavor as well as moisture to the cake.  There are many versions of this baked delight and they are probably as numerous as the number of pastry chefs in this country.

Start with the basic recipe and then add your own fillings or fruity or nutty additions.  The recipe below is for a basic cake with a nut/sugar topping.  I belatedly remembered the Raspberry Sauce left over from our Waffle Breakfast this morning.  It would have been a nice addition to go between the layers of the cake.

This cake does not have two layers in the traditional sense which would mean that there were two layers baked in separate pans.  Just that half the batter is poured into the prepared pan and sprinkled with half the topping and then the remaining batter goes over the topping and the remaining topping goes over the second layer of batter.  The raspberry would have been a nice flavor contrast.

Remember that if you decide to make this cake, that the ingredients can be varied.  Buttermilk can be used in place of sour cream and in fact, I did not have quite a whole cup of sour cream so I added enough buttermilk to make up the difference.  Buttermilk, like sour cream, adds a nice rich flavor to baked goods and also adds some moistness.  I also substituted ¼ cup of the granulated sugar with ¼ cup of brown sugar.  I love the flavor of brown sugar which can give a little caramel taste to baked goods.  In addition to or in place of the nuts, shredded Coconut can be used for the toppings.  Orange or lemon zest would also be a nice addition to the batter.  You can even add dried cherries or cranberries to the batter also.  Try your own variations with this recipe and please let me know how they turn out. 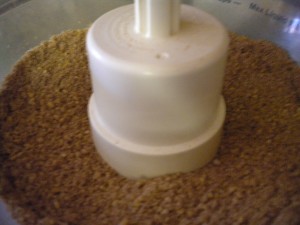 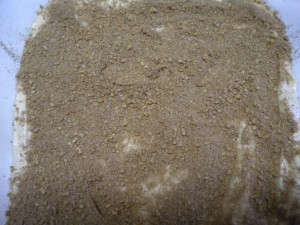 Topping Sprinkled on First Half of Batter

8.  Bake in preheated oven on middle shelf for 45-50 minutes or until a toothpick inserted in the      middle comes out clean.

9.  Cool on rack 20-30 minutes before removing from pan or serve directly from the pan. 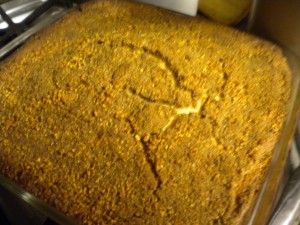