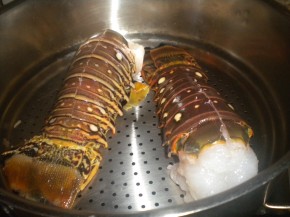 June 15th, 2012 is ‘National Lobster Day’.  Lobster without doubt is one of the most expensive items that you will find on a restaurant’s menu or even at the fish market or supermarket.  But this wasn’t always the case.  In the early days of our couontry’s history, lobster was thought to be garbage or throwout food.  The reason for this is that lobster, like most all shell fish or crustaceans are bottom feeders and bottom feeders are thought be the dregs of society or the aquatic world.

When fishermen found lobster caught in their nets, they often left them on the beach for the poor or indigenous to eat.  Lobster was food that was left to the lower members of society and indentured servants.  Servants often specified in the employment agreements that they would not eat lobster more than twice a week.  How many of us would love to eat lobster even twice a month, let alone twice a week!  Alas, this attitude towards lobster did not last long and in the mid part of the 19th century lobster became a popular item on the menues of New York and Boston restaurants.  With the development of lobster fishing boats, the crustacean became even more popular.

Without a doubt, Maine Lobster is probably one of the favorite and most available here in the United States.  However, with the advent of air travel and shipping, lobster from all over the world is available.  One can purchase giant lobster tails from Australia, mid-size ones from the Carribean and even smaller ones from ???

One of my favorite lobsters are those found in Rosarita, Baja California.  The Mexican variety are smaller than the Maine Lobster, but they are sweet and usually at least two or more are served at a sitting.

One of my favorite ways to prepare lobster is to purchase one tail and cut it up in large bite-sized pieces and serve it in an Alfredo Sauce with Linguini.  This way, one lobster tail will easily serve two people.  However, we do sometimes just want to savor the lobster meat itself and in this case at least one lobster tail per person is called for.  (This is the Carribean variety – one large Australian lobster tail would do for two people, provided they do not have HUGE appetites.

To observe National Lobster Day, here is one of my versions of a Lobster Tail Dinner.  For two people, you will need two mid-size lobster tail, two large baked potatoes, fresh chives, fresh herbs such as basil, oregano, chives, etc., unsalted butter and a nice green salad made with artisan greens and dressed with a blue cheese dressing.

Scrub the Potatoes and pierce with a fork;  this will prevent them from exploding in the hot oven – just as a precaution, I always make an extra potato and if none explode you can use the extra for home fries for another meal.  If you like your potatoes to have a crsipy skin, coat the skin with vegetable or olive oil before placing in the oven.  If you do use oil on the skin, be sure and place a piece of foil under the potatoes so the oil does not drip down onto your oven floor and cause smoking.  If you are going to have Chives with your Baked Potatoes, prep them now.  We have Chives growing in our garden, so I picked them just before using them to preserve the flavor.  Wash and dry and then snip.  The easiest way to snip them is with a pair of kitchen shears.  Before doing so, hold the chives in one hand and cut them in a straight across.  This will make it easier to snip the chives evenly. 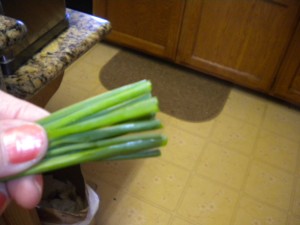 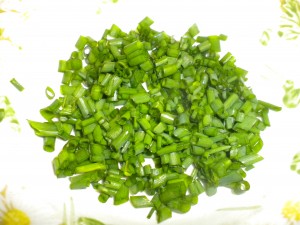 The next thing to do is to clarify your butter.  Take a quarter pound of butter (1 stick) and melt it in a microwave proof bowl or measuring cup.  Let it settle so that the milk solids fall to the bottom.  (The better the grade of butter, the less milk solids there will be in it)  Once the solids fall to the bottom pour off the fat portion  through a cheese cloth lined strainer into another bowl. 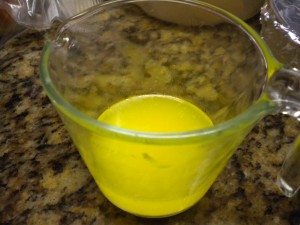 If you are going to make an herb butter wash and dry your herbs and then mince them either by hand or in a mini-food processor. 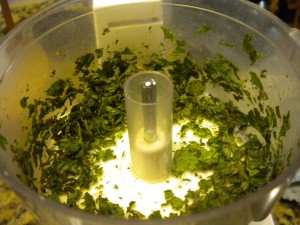 Herbs minced in a Mini-Food Processor

Once the Butter has settled and is clear, you can add the Herbs to the Butter;  set it aside until ready to serve.  When ready to serve, you can just re-heat it until melted.  (About 30 seconds or less in a microwave oven) 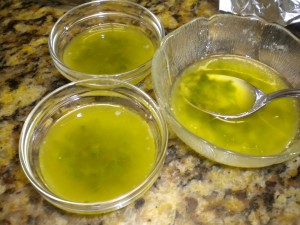 Next, prepare your salad and refrigerate until serving time.  Make the Salad Dressing – in this case ours was Bleu Cheese.  Bleu Cheese can be purchased in small portions in the Cheese Section in your supermarket or you can go to a speciality store.  For the complete recipe please see  bleu-cheese-dressing/ 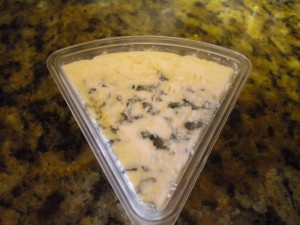 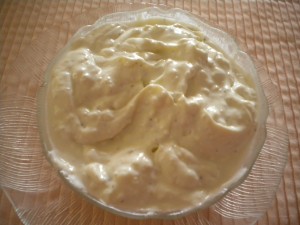 Since I was serving Mushrooms with the Lobster, the next thing I did was prepare the mushrooms.  Wipe the mushrooms with a damp paper towel.  (Since mushrooms act like sponges and soak up water, it is best to avoid washing them if possible – I don’t often follow this advice as some mushrooms also pick up a lot of the growing compound and just have to be washed)  If you do wash your mushrooms, be sure to blot them dry really well with a paper towel.  I quartered the Mushrooms and then sauteed them in Olive Oil with 2 cloves of minced Garlic.  When they were done, I shut off the heat and set them aside.  Just before serving, I reheated them for a short time. 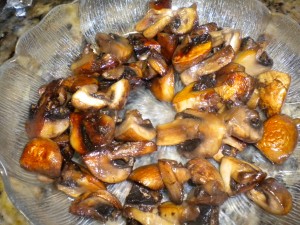 The next item on the agenda was to prepare the Lobster.  We had two tail which I decided to steam first before broiling.  When you broil them you are never sure when they are done – you don’t want your lobster to be over-cooked and when broiling for the whole time, sometimes the tops get charred.

I split the tail down the back of the shells.  This can be done with a cleaver, a sharp knife or a pair of kitchen shears.  Then I placed them in my steamer – steaming takes only 5-10 minutes depending on the size of the tail.  Just before serving I placed them under the broiler and broiled them for about five minutes. 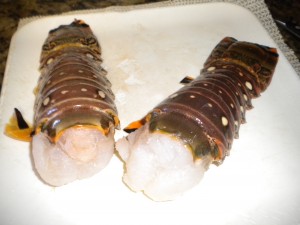 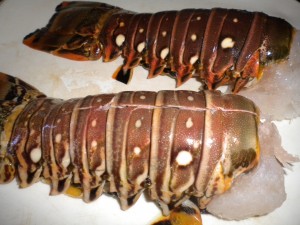 Split down the Back 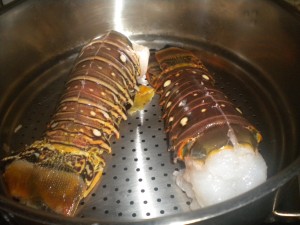 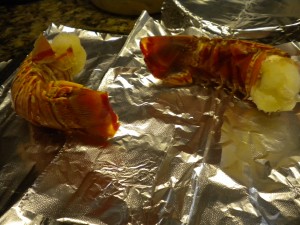 While the lobster were broiling, we started on our Salad and I microwaved the butter, just to warm it up.  This took about 15 seconds.

The main course was the Lobster, Baked Potato with Butter, Sour Cream and Chives and the Caramelized Mushrooms.  These are all some of my favorite foods.  Even though the Carribbean Lobster Tail, was ample in size, I still could have eaten more.  I just love lobster!  In any form! 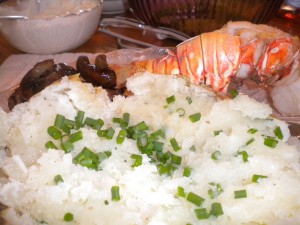