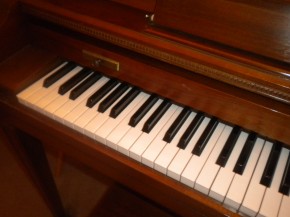 Musical Desserts!  What are they?  Desserts that play music?  Alas no.  These are desserts that were created to honor people or certain Arts in the musical world.

The Musical Desserts that I am familiar with are:

Pavlova – Both New Zealand and  Australia lay claim to the creation of Pavlova and it is the National Dessert of both countries.  This famous dessert was named after the Russian ballerina Anna Pavlova in honor of one of her visits to the above name countries.   It consists of a meringue base topped with whipped cream and fruit such as strawberries, passion fruit or kiwi.  Pavlova can either be rolled like a jelly roll or free formed in a ring shape.

Opera Cake – a multi-layered sponge type cake put together with calorie-laden, but delicious fillings such as Chocolate Butter Cream, Chocolate Ganache and topped with a Chocolate Glaze.

Peach Melba – a dessert named after the famous Australian Opera singer, Nellie Melba.  The dessert was created by Escoffier at the Savoy Hotel in London, while Melba was doing a performance of Wagner’s. Lohengrin in London.  Escoffier was the famous French Chef who set the standard for all French Cooking.  Peach Melba consists of Poached Peaches on top of Vanilla Ice Cream and is topped with a Raspberry Sauce.  For a recipe for this dessert go to deserts/peach-melba/

Crepes Suzette may be another Musical Dessert.  There are several stories associated with the creation of this dessert which consists of Crepes (a very thin pancake) served with a flaming Orange Sauce.  One of the stories circulating about Crepes Suzette is that it was named after a famous French Actress whose name was Suzette.  Another story goes that it was named after a character in a play.  Whatever the story, Crepes Suzette are delicious and fun to watch being made.  Even though it is not exactly a ‘Musical Dessert’, there is some theater involved, allowing it to surreptiously fit into this category.

Charlotte Russe, although not created as a Musical Dessert, was nonetheless created for a famous person.  There seem to be several different variations on the origin of Charlotte Russe.  The first Charlotte was created during the 18th Century and named for the wife of King George III of England.  It consisted of an apple compote baked in a round mold lined with toast slices.

A few decades later, the great French chef Careme adopted the name but altered the concept in response to a kitchen crisis.  He was preparing a grand banquet for King Louis XVIII and discovered he did not have enough gelatin  for the Bavarian Creams he was making.  Careme used Lady Fingers to bolster the sides of his dessert.  The result became known as Charlotte Russe.  It is said that he called it Charlotte Russe, because at that time, anything Russian was very popular.

There are other sources that say the dessert was created for or named after, the Russian Czar, Alexander.  At this point, it really matters not why or whom it was created for.  Charlotte Russe was a very popular dessert during the early part of this century and is very good.

Desserts, whether they are named after Music, Musicians, or Vocalists or Actresses, or Royalty are delicious and usually enjoyed by most who indulge in them.