This Spring on our ‘almost yearly’ trip to Hawaii we rented a Condo so that we would have a kitchen so that we could cook the fresh produce and seafood that we were able to purchase at the Farmer’s Markets and Seafood Stores.  The following is about the food we purchase, cooked and ate.

Let’s start with Breakfast. On several mornings we arose very early to go Birding which is one of our favorite things to do on Vacation.  On these days, we just brought along some pastries and drinks but on the days that we slept a little bit later and ate breakfast in the condo, I did cook for at least a couple of them.

For one of the mornings, we had a Cinnamon Pull-Apart loaf from Foodland which to our liking did not have enough Cinnamon so I turned it into French Toast.  Cinnamon Bread, Egg Bread, Hawaiian Sweet Bread or Brioche make a delicious French Toast product.  -french-toast/To make the French Toast, I first sliced the Cinnamon Bread into thick slices and then let it air dry overnight. 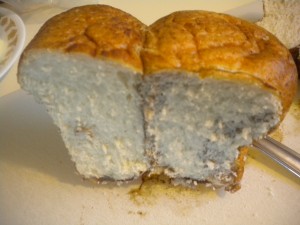 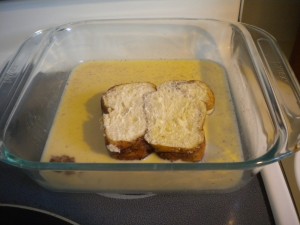 At Breakfast time, I made a Batter with Eggs, Cream, a little Sugar, Cinnamon and Vanilla.  I then soaked the sliced Bread in the Egg Mixture and then fried it in Butter and just a little bit of Oil.  The Oil helps to keep the Butter form burning.  (Oil has a higher smoking point than Butter).

The soaked Bread Slices were cooked in the hot Butter/Oil combo to develop a nice brown crust on the outside.  We ate it with Coconut Syrup for Ev and just Sugar for myself.  This was a very good breakfast and we even had a slice leftover for a snack later in the day. 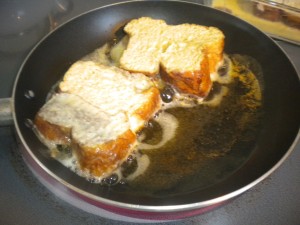 The second Breakfast that I made was Coconut Pancakes with Grilled Baby Pineapple.  Unfortunately most of the Pineapple is now grown in the Philippines, but the Baby Pineapple that I purchased was grown on Kauai.  (This was a Certified Farmers Market and all of the produce must be grown in Hawaii).  The Pineapple was exceptionally sweet, but when you grill it in a little Butter the sweetness is brought out and becomes intensified.  To give it just a little caramelization I used a small amount of Sugar in with the Butter.  Not only did it give a nice golden/brown color to the pineapple but it did fortify the flavor of the pineapple. 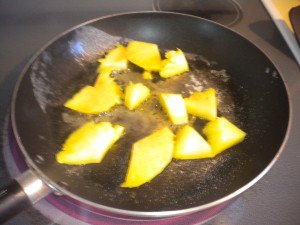 Usually I make my Pancake Batter from scratch, but since we were on the Island only for 10 days, I did not want to start buying a lot of ingredients that we would not use.  So therefore, I purchased a bag of Coconut Pancake Mix.  The directions on the package said to add only water, but I never pay attention to that.  We want our pancakes to have a lot of flavor and nutrition, so I added an egg and used milk instead of water.  I also added a small amount of melted butter to the batter.  In the photo of the batter you will see some small lumps.  Pancake Batter should never be beaten until smooth.  This will cause the panckes to be tough! 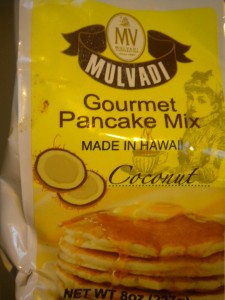 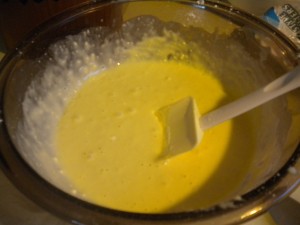 You will notice in the photo below that the Pancakes were cooked in a skillet rather than a griddle.  When renting condos, you have to make do with what is available unless you want to bring your own equipment.  Next time I am definitely going to bring my own knives, because the knives that were there were barely functional. 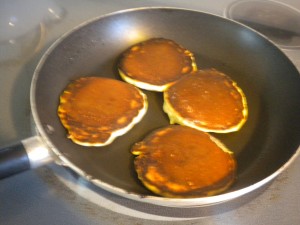 The pancakes were delicious with the Coconut Syrup (made in Hawaii) and the grilled Pineapple Chunks.

The rest of our breakfasts were cereal, eggs and bacon, etc.

Most of our dinners were eaten out, but I did cook on some of the evenings.  One night for dinner we had a Huli Roasted Chicken from the market.  Since it was too much for two people to consume at one time, I saved the Breasts and made a Chicken Salad in Papaya Boats for dinner the next night.  I put diced Maui Onion and Celery into the Chicken and dressed it with Papaya Seed Dressing.  Along with the salad we had sautéed Baby Bok Choy (from the local Farmer’s Market in Hanalei) with Ginger and fresh Garlic. 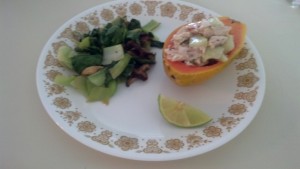 The next night we had sautéed Ono with Shitake Mushrooms and a Green Salad with Papaya Seed Dressing.  I sprinkled the Ono with a Hawaiian seasoning mix and let it sit for about 15 minutes.  Next I sautéed Shitake Mushrooms with some Ginger and fresh Garlic. 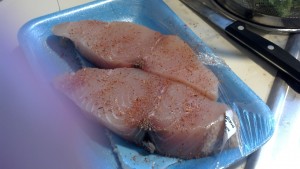 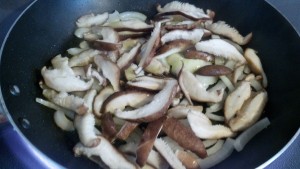 When the Mushrooms just started to soften, I pushed them aside and added the Ono which I lightly sautéed on each side.  Ono is such a good fish and this was so fresh that It did not need to be cooked all the way through.  Just browned on the outside and pink on the inside is the way to go!   For an added boost to the sautee, I added just a touch of Sesame Oil at the very end of the cooking. 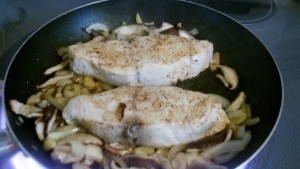 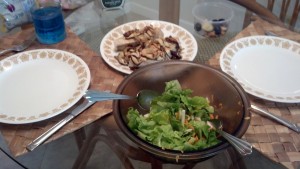 For dessert we had Pineapple/Coconut Ice Cream with Chocolate Cake. 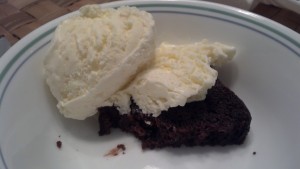 Our beverage that night was Hawaiian Sun Tea which I made by placing some  Tea Bags in a pitcher of cold water along with lime slices.  This was put out on the balcony table to brew under the sun.

One of the items that we ate, but did not cook was a classic but made in an unusual way.  This was a Bacon/Lettuce/Tomato and Avocado Sandwich on a Taro Brioche.  What was unusual about it was of course, the Taro Bun, but in addition it was made completely to order.  The Bacon was cooked just for our sandwiches and the Tomato and Avocado were sliced to order.  We did have to wait about 15 minutes for our sandwiches, but they were well worth it. 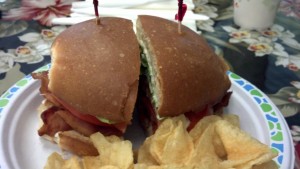 One other food item that we ate out was Pizza at the Bakery in Kilauea.  They make excellent pizza and we have been going there for years every time we go to the North Shore of Kauai.  We had a pizza dressed with Sun-dried Tomato Pesto and Basil Pesto with Pepperoni and Mushrooms and of course Mozzarella.

One day in Ka Paa I had Lettuce Tacos at Pacific Bistro which is now actually a Chinese Restaurant.  The Lettuce Tacos were actually what is known as lettuce wraps, except the lettuce wasn’t wrapped;  it was actually just little lettuce cups. 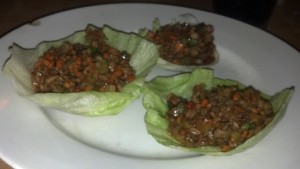 The other two places that we ate at that were noteworthy was the restaurant at the St. Regis Hotel (formerly Princeville Hotel) and the Lighthouse Bistro in Kilauea.

For dinner at the St. Regis we had Steak with a Burgundy Mushroom Sauce, a very tasty Sweet Potato Dish, sautéed Spinach and a delicious dessert cobbler made from Mango and Strawberries.

At the Lighthouse Bistro Ev had Shrimp in a Coconut Sauce over Linguini and I had a steak again.  Dessert was a Passion Fruit Crème Brule with Chocolate Sauce on the side for Ev. 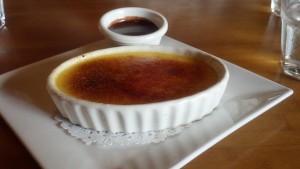 Aside from the food our vacation was a success as usual.  We enjoyed the ambience, the sweet smelling Hawaiian Fragrances, the balmy breezes and our gorgeous ocean view. 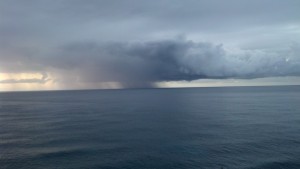 Ocean View during Rainstorm on the Horizon