The Monday after our Mountain Trip we hit another spot on my son’s  Food List.  This was Hooter’s which recently opened up a Restaurant in our locale.  Again, Monti had made sure to be on their mailing list and had Birthday Coupons for Kratae and himself.  We indulged in 3 different kinds of Chicken Wings with Bleu Cheese and Ranch Dip.  Kratae had a Shrimp Sandwich which she said was delicious and it certainly looked like it was.

On the way home Monday Night, we stopped at the local deli and picked up some Pastrami, Corned Beef, Pickles and Rye Bread.  Once we got home, I made my special Potato Salad and Cole Slaw which Quinn had requested. 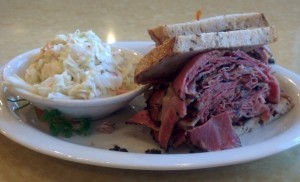 The next day was David’s Birthday and for it, I made Lasagna with Meat Sauce and Sausage (which Monti had requested) along with a big Salad.  For dessert we had Brownies and more Peanut Butter Fudge. 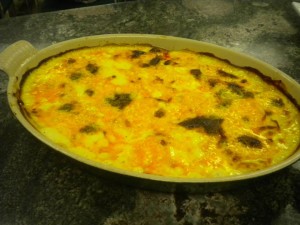 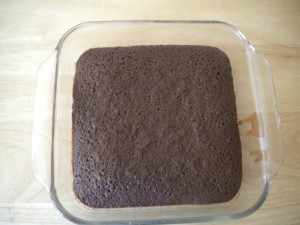 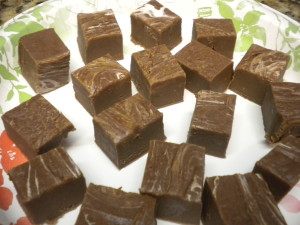 On Wednesday, Monti, Kratae and Quinn took the Bus to the Valley and transferred to another bus (Kratae wanted to see what a bus ride was like here) and then transferred to the Subway which they took to Hollywood.  After making some purchases in Hollywood, they then re-boarded the Subway to Union Station.  From there they walked to Phillipe’s (a very old famous restaurant in downtown L.A.) and had Lamb Dip Sandwiches and Cole Slaw fbid=10151471226746122&set=a.10150683053886122.425502.294891686121&type=1

Next they took the bus to the Santa Monica Pier where David picked them up and took them to My Father’s Office, a well-known restaurant in West L.A.  where they had Hamburgers.  Again, they weren’t quite what they remembered.  http://www.yelp.com/biz/fathers-office-santa-monica

Thursday night the crew went to In & Out where they had Animal Fries and Ev and I went out for Chinese Food.

On Saturday, the 22nd we had a Family Birthday Party (3 Birthdays in March) for which I spent almost two whole days cooking for.  We had Roast Turkey Breast, Tri Tip with my special marinade along with Vegan (for Joel) Pasta Salad, homemade Baked Beans and White Bean Bruschetta.  I also made Ciabatta and Croissants.  For dessert it was a Giant Chocolate Chip Cookie and a Vanilla and Chocolate Genoise Cake with a Mocha Buttercream frosting.  Beverages were water, sodas and bubbly.  This event was attended by all the Riemans (except Joel who wasn’t feeling well) and lasted for about 10 hours.  Fortunately, I had engaged one of my TA’s who help with my cooking classes to help with this event. 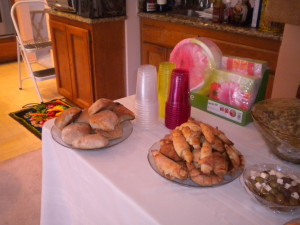 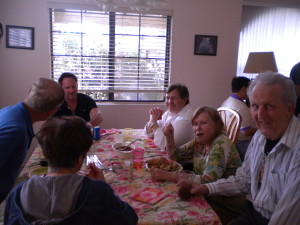 The next day was the last day that my out of the country family were going to be here.  They wanted to make one last trip to Jack in the Box (Kratae loves Breakfast Jacks) so we did that.  They also purchased Bacon Insider Burgers and Potato Wedges.  Somehow, we also managed to fit in the leftover Turkey and Tri Tip from the party the day before.