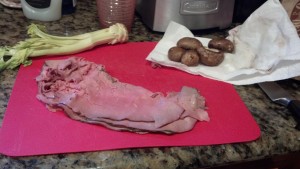 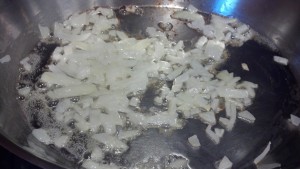 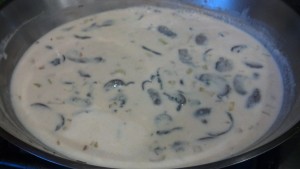 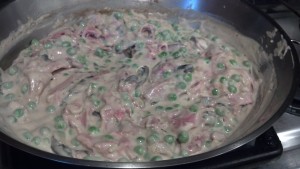 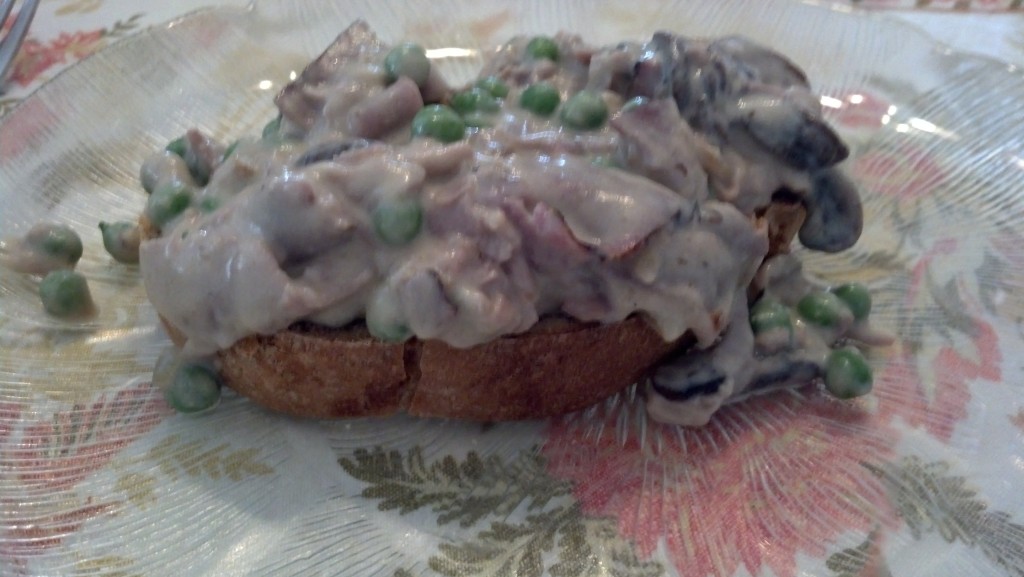 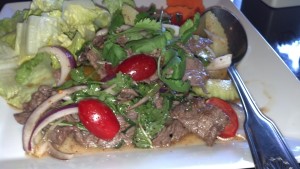 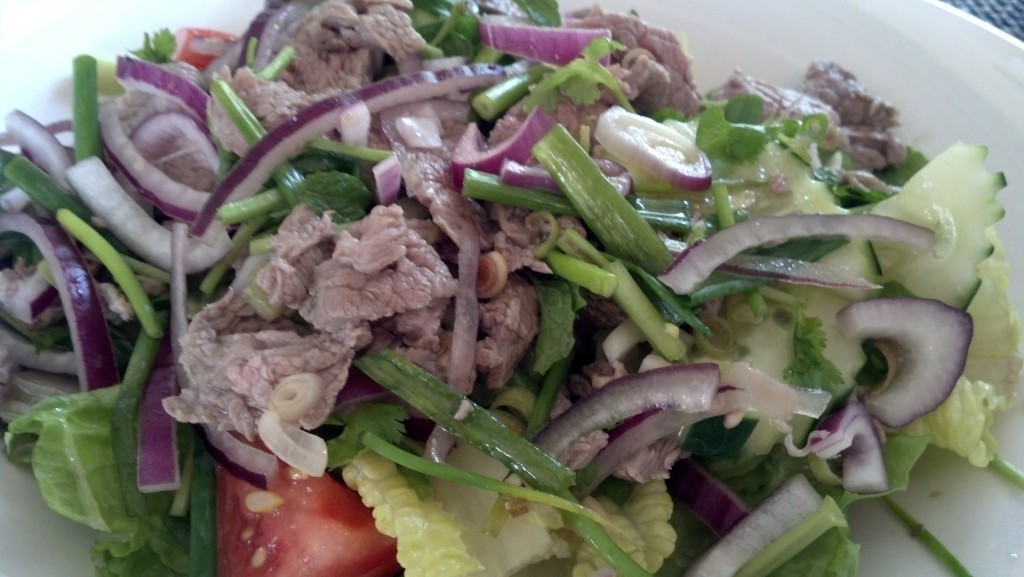 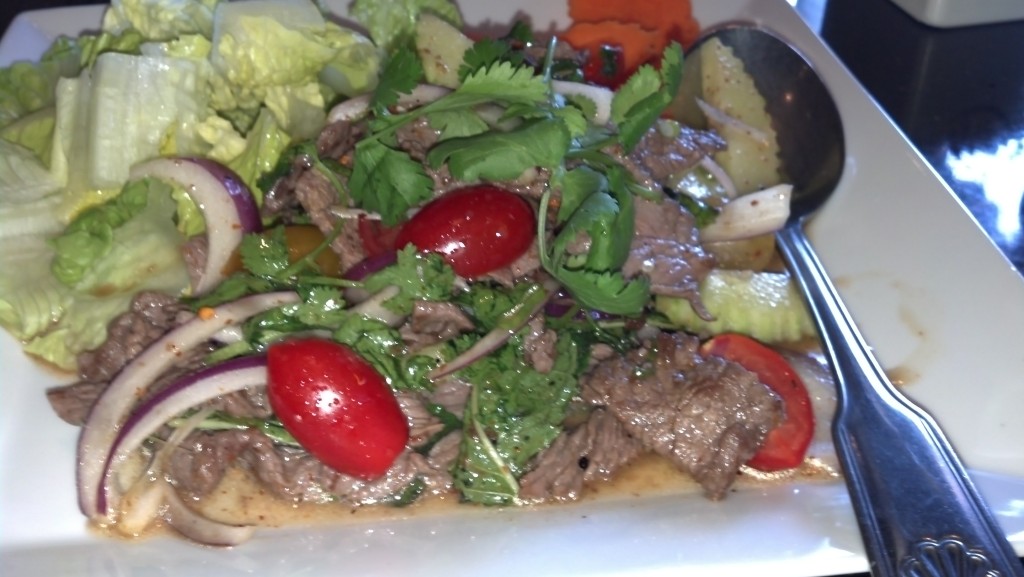 Stir Fry is one of my favorite dishes to cook and to eat.  You can literally clean out your refrigerator and almost always come up with enough items to make a delicious Stir Fry Dinner.  Beef, Pork Chicken or Fish or even Tofu will serve as the Protein.  Vegetables such as Cabbage, Celery, Carrots, Onion, Spinach or Broccoli will complement your protein items.  Asian Condiments such as Soy Sauce, Bean Sauce, Hoison Sauce and even Oyster Sauce will add the flavor enhancements.  A Stir Fry Dish can be served with either Rice or Noodles.

The Noodles that I prefer with Asian Stir Fry are Rice Noodles which only need to be cooked or soaked for a short time.  (This will depend on the manufacturer and the directions on the package they come in) 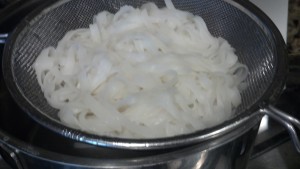 This particular night we had decided that we wanted Stir Fry Shrimp.  While I had the Shrimp in the freezer I did have to go out and purchase a few of the Vegetable items for the Stir Fry.  The Vegetables that I did have on hand were:

Broccoli Stalks – I love the crunchiness of the stalks – peel the stalks and then slice thinly. 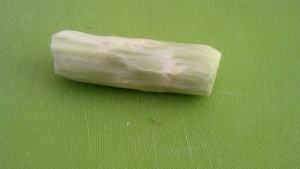 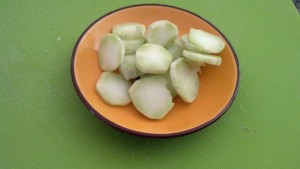 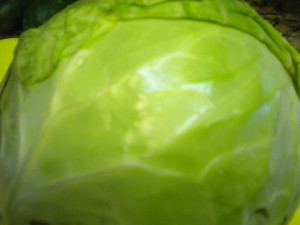 Orange Carrots  – Carrots can be had in a variety of colors these days – Red, Yellow, White or even Purple.

Garlic – an absolute necessity when it comes to Stir Fry

Eight Ball Zuchinni – an interesting shape – this is a round zuchinni just about the size of a pool table ball ‘8’ ball. 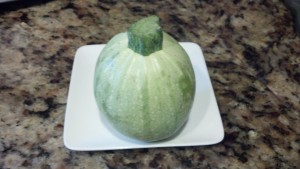 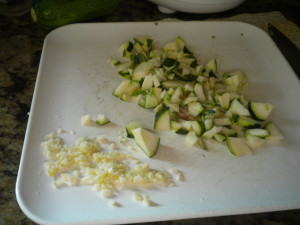 Ginger Root – adds amazing flavor – a little zing!  Cut off the amount you need (usually a piece about the size of a quarter) and peel.  This can be done with a teaspoon as the skin has a contrasting texture to the Ginger itself.  Then mince before using. 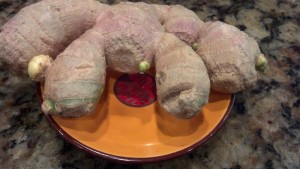 Maitaki Mushrooms – these are also known as Beech Mushrooms which also come in a white variety.  They grow together in a cluster which you can cut apart at the base leaving tiny mushrooms on a slender stem. 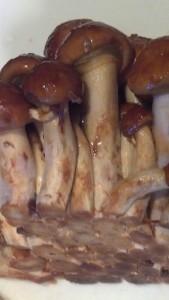 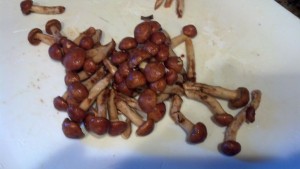 The Vegetables that I purchased for this dish were: 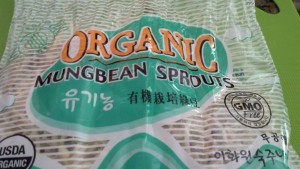 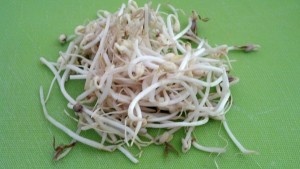 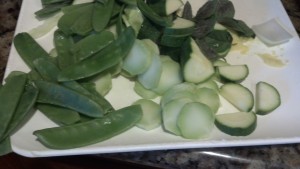 You will want to marinate whatever Meat you are using in your Stir Fry;  Shrimp or any other Seafood should not be marinated for more than about 20 minutes.  Chicken, Beef Pork or Lam on the other hand can be marinated for several hours or even overnight.  For our Stir Fry this night I did use Shrimp.  For the Marinade I used:

To make your Stir Fry start with the Onion;  sauté in a wok or large sauté pan just to soften and then add the Garlic.  Next add the Vegetables that would need the most cooking, starting with the Cabbage and then the Carrots and lastly the Zuchinni which needs very little cooking. 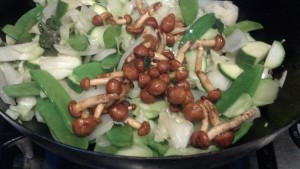 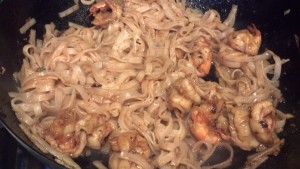 Once the Noodles have warmed and been coated with the Sauce, add the cooked Vegetables along with the Pea Pods, Bean Sprouts and the Bell Pepper. 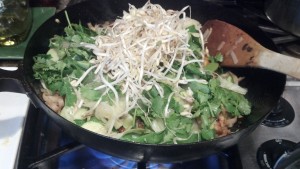 Vegetables and Shrimp combined with the Pea Pods and Bean Sprouts added.

Once everything is combined and hot serve immediately.  This is a great one-dish meal or can be served as a second course after a soup or salad starter. 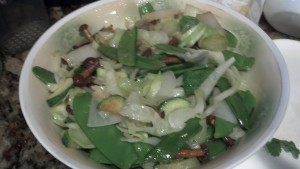 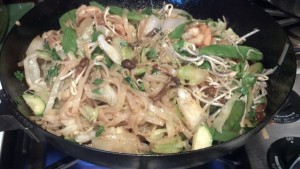