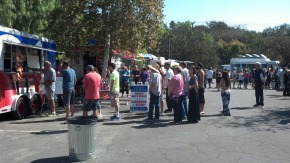 Today, Sunday, October 12th,  my Son David and I went to the Thousand Oaks Food Festival.  This was put on by the ‘Music Dept. Booster Club of Westlake High School.  It was held at the North End of Conejo Creek Park adjacent to the Library, Teen and Senior Centers.  This was the first Food Truck Festival that we had ever attended even though we have purchased and eaten food from numerous Food Trucks that frequent the Southern California area.

As festivals go, this was not really a large gathering of trucks but there was a decent variety.  Among the trucks that participated were two Asian/Fusion, one Italian, one Hamburger, one Lobster Roll, a Grilled Cheese Truck (which had some really interesting sandwiches) and one Barbecue.  There was also Ice Cream, Gelato, Italian Ice and Beverage Vendors.  We tried the Lobster Quesadilla from one of the Asian Vendors and from the second one we had Deep Fried Shrimp Balls (these were chopped Shrimp which were Breaded and then Deep Fried) and a Breakfast Bao which contained Sausage and an Egg among other things.  Of the two trucks we enjoyed the Lobster Quesadilla more than the Shrimp Balls and Bao.  The Quesadill was a little on the spicy side but not too much so.

We had bottled Raspberry Lemonade from the first Vendor and Vietnamese Coffee from the second Vendor.  Finally at the end we had Gelato to cool down the spice from the food.  The Gelato that we tried was Salty Caramel which was actually Salty Caramel ribbons in Vanilla Gelato.

One of the drawbacks was that there was no planned seating area for people to sit down and eat – whether this was an omission on the part of the planning committee or a ruling of the park we don’t know.  Some people sat on the grass, some were smart enough to bring their own chairs and tables but we ended up sitting on a couple of the large rocks (cave-man style) that were part of the landscape.

In the Park Area there were plenty of table and benches but these were not convenient to the Food Trucks.  The Westlake High Band was performing throughout the day and there free massages, Pet Adoption, and other booths that rouonded out the event.

It was fun and interesting and worth at least one try.  We don’t think we would go to another Food Festival though unless the trucks changed their format and sold small bites so that one could taste more variety.  That being said we do like most of the food from the Food Trucks in that the food is not ordinary and really whets the taste buds.