Angel Food Cake is like it’s name implies – ‘light and heavenly’.  Angel Food Cake is the perfect summer dessert.  It can be eaten plain (and not make you feel too full or sugared out) or it can be topped with Strawberries and Whipped Cream or filled with Ice Cream and covered with a Baked Meringue for a faux ‘Baked Alaska’.

The main structure of an Angel Food is Egg Whites whipped full of air which in turn provides the leavening for your cake.  Because it has no fat, an Angel Food Cake has fewer calories than most other shortened cakes.  There are three main ingredients in Angel Food Cake – Egg Whites, Sugar & Flour. Add a little salt for balance and Vanilla for flavor and lots of air for your leavening agent.

To have your Angel Food Cake come out like it should, just follow a few important rules:

1.  Separate the Egg Whites from the Yolks and make sure that not a speck of Yolk gets into the White portion.  Egg Whites are mainly Protein and Egg Yolks contain a good portion of Fat.  The Whites will not beat up like they should if you get even a tiny bit of yolk into them.  So, when you separate your Whites from the Yolks, follow a few simple rules.

2.  Use a tube pan that is large enough to hold at least a 12 Egg White Cake.  Never, ever grease the pan when making Angel Food Cake or other Sponge Cakes.  The lubricant will make the batter fall down and not raise up sufficiently.  The Angel Food Cake needs the ungreased walls of the pan to cling to when raising in the oven. 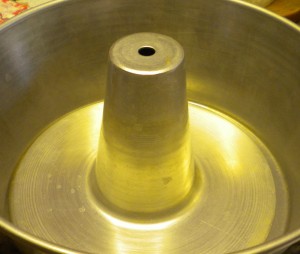 3.  Always use Cake Flour for an Angel Food Cake.  (Cake Flour is lighter than All-Purpose and will therefore give you a lighter cake.  Spoon the Flour into a dry measuring cups and level off with a straight-edged spatula.

4.  Sift the Flour and half the Sugar into a clean, dry mixing bowl.

5.  Make sure the bowl that you are going to beat the whites into is clean and dry;  any speck of grease or other residue will prevent the Whites from beating up properly.

6.  Always, fold the flour into the beaten whites, DO NOT MIX – the folding process is an over and under motion.  Beating will deflate the Whites and prevent the cake from raising up properly.

7.  When you are ready to begin your cake preparation, lower your oven rack to the lowest setting and heat the oven to 350 degrees.

For the recipe go to angel-food-cake/.  This recipe is a 12 Egg White recipe – for a taller cake increase the recipe by 1/2 – use 1 1/2 cups of Whites instead of 1 cup.   Increase all the other ingredients accordingly.  For the increase recipe use a 12 inch tube pan.  The cake pictured in the recipe was made in a 10 inch tube pan.  I prefer the large one because it make a more attractive cake. 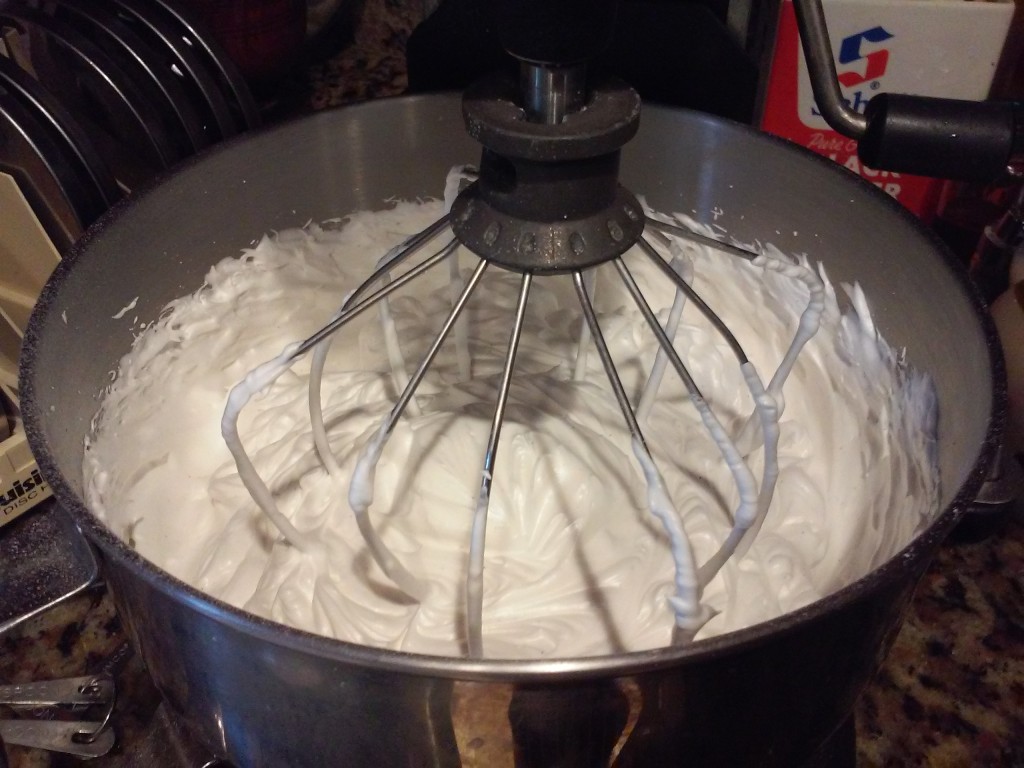 The best and easiest way to beat your Whites if to use a ‘standing electric mixer’.  A hand mixer can also be used but the standing mixer will give you the best results.  As an anecdote, the very first Angel Food Cake that I made was when I was a teenager and decided to make for my Mother for Mother’s Day.  We did not own an electric mixer or even a hand electric mixer.  All we had was a Rotary Egg Beater and this was before they put ball bearings into the wheel.  It took me so long to beat those Egg Whites that I ended up with a blister on my thumb.   If we had even a wire whisk, that would have been infinitely better.  But the Cake turned out fine but I don’t think I made another Angel Food until I owned an electric mixer. 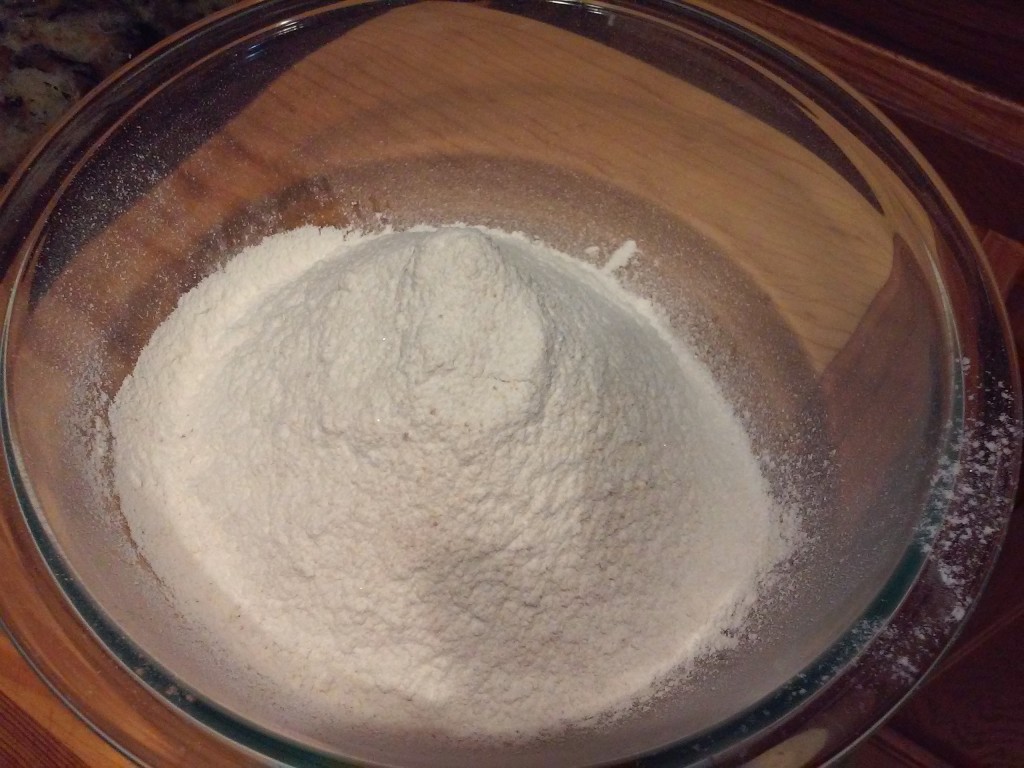 Sifted Flour and half the Sugar 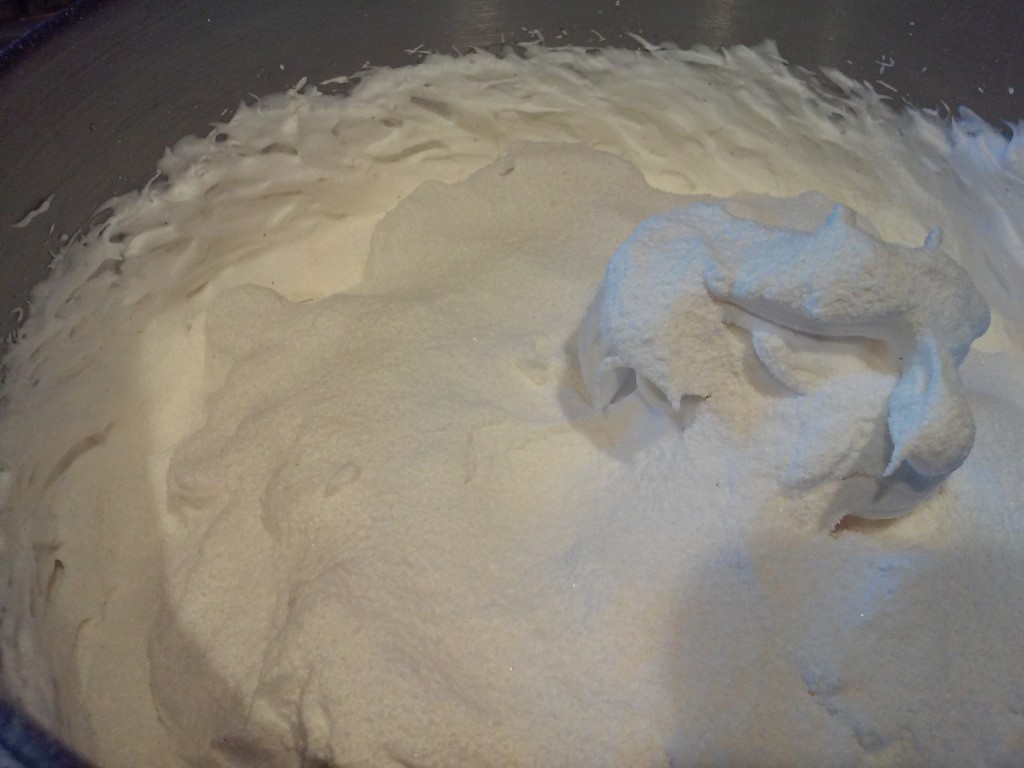 Use a rubber spatula to scrape the batter from the mixing bowl to the baking pan.  Level off the top and then place in the lower third of the pre-heated oven and bake for 45 minutes.  The increased recipe bakes for the same time as the original one as the pan you use is larger. 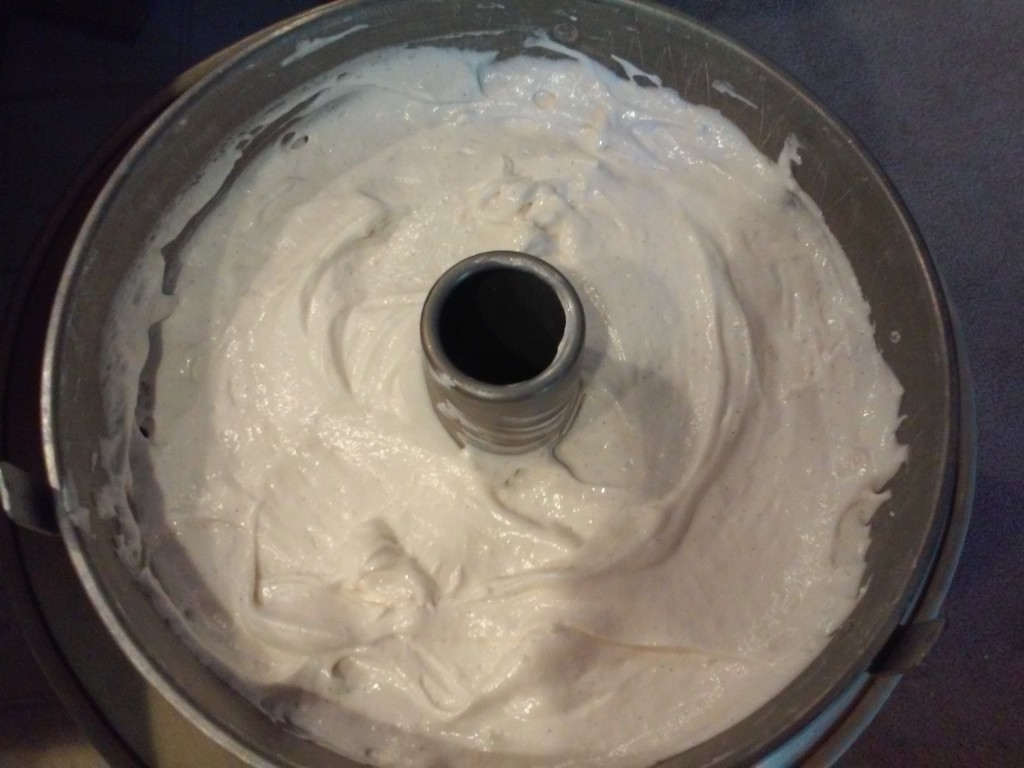 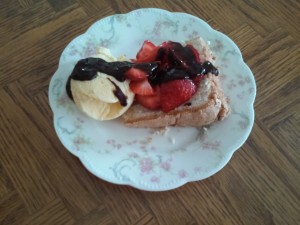 With Ice Cream, Chocolate and Strawberries

Vanilla Ice Cream and a Chocolate Sauce made

from Bittersweet Chocolate melted with Butter and

Keep it thin so it can be poured over the cake.

The photo below shows Angel Food Cake with

have been cut in half.  Add a little Whipped

Cream or just pouring Cream and you have a

delicious dessert or even breakfast. 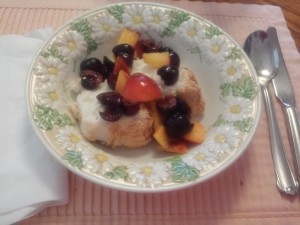