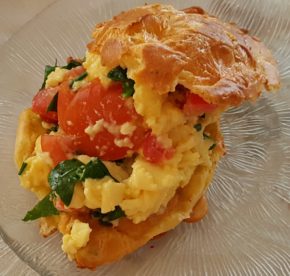 This Week’s Baking Project was Gougeres – a cheesy version of Pate Choux.  In this version the Pate Choux is made with Fat Free Milk instead of water and there is also the addition of Cheese.  I used Gruyere but Parmesan or other types of semi-hard or hard cheeses can be used.  This Project was fun and seemed to have been participated in by more members than any of the others.  At least there certainly was a lot of feedback and posting of photos.  Not only was this one fun but it was relatively simple and took very little time as compared to the first few projects that we did, especially the Lemon Chiffon Cake (which I loved).  The recipe for the Gougeres is posted in the recipe section of this blog but it came from the book “Tartine” which was named after the Restaurant of the same name.

For anyone who has not made Pate Choux before or even for those of us who have, it is always fun to see the marvel of the Choux Dough Puff Up and form these marvelous pockets which can be filled with anything from an Appetizer, to a Main Course or Dessert.  I used mine for Sunday Morning Breakfast with Herb and Tomato Scrambled Eggs along with a Fruit Salad dressed with Fresh Basil and Sweet Mint.

Below are the preparation photos:

The Recipe calls for 1 cup Skim (Fat Free) Milk – I had only 2% so used half milk and 1/2 water.  I may have gotten better height in the Puffs if I had only used water. 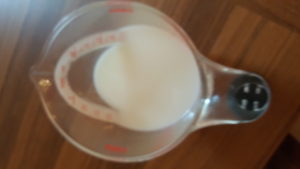 The Milk or Water (whichever you use) is brought to a boil along with the Butter over medium heat.  Then the Flour is added all at one time and vigorously beaten until the mixture all comes together.  At this time, the mixture is then placed in a Standing Mixer Bowl and the Eggs are added one at a time.  If you don’t have a mixer, this can be done by hand with a wooden spoon, but it will take some energy to do so because the Eggs need to be thoroughly beaten into the Dough. 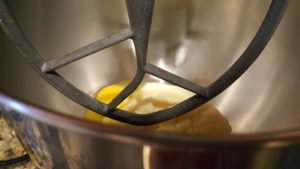 Adding the Eggs one at a time

You can also use a Food Processor, but I have found when making Pate Choux n the Food Processor that you usually end up using 1 less Egg than called for.  This is because the speed of the Processor is so fast that the ingredients get incorporated more thoroughly and at a faster speed.

Once all the Eggs have been incorporated then you add the Cheese, Chopped Herbs and Pepper.  Beat these items in by hand with a wooden spoon. 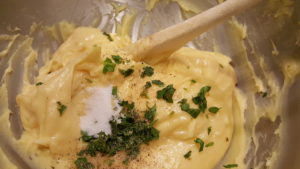 Next you can form the Gougeres on a lightly greased (I don’t usually grease the pan because there is plenty of butter in the dough but the recipe in mention does say to do so.  You can also line the pan with baking parchment or use a Silicon Baking Sheet, which is my preference. 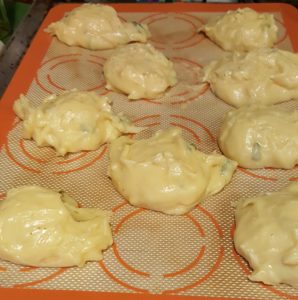 The Puffs are baked at 350 degrees for at least 25 minutes but if you want a darker and crisper puff 45 minutes is recommended.  (The older recipes call for a 400 degree oven but they do seem to rise alright at 350 degrees.

If you make the small size they can be eaten warm as Appetizers or accompaniment to Soup or Salad.  If you make the larger ones, the tops can be cut off and they can be filled with a creamed mixture or scrambled Eggs as I did.  I made Soft Scrambled Eggs using the double boiler and added diced Tomatoes, Baby Spinach and Cilantro just before the Eggs were done.  Serve with Bacon or Sausage and a fresh Fruit Salad. 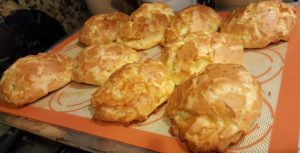 Below are the Members Photos. 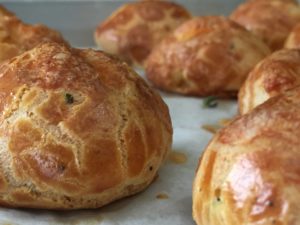 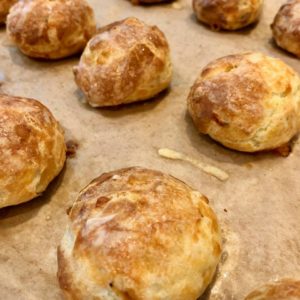 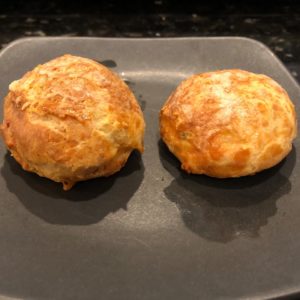 Jeanne’s Experiment  – The one on the left baked at 425 and the one at right at 350.  (There does seem to be a considerable difference in the photo although Jeanne said in reality there really wasn’t much difference) 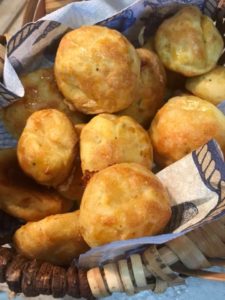 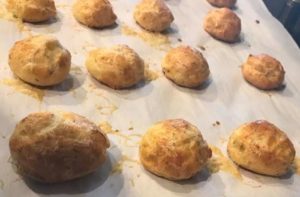