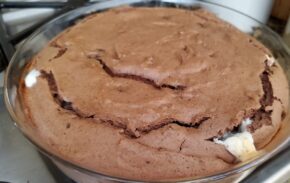 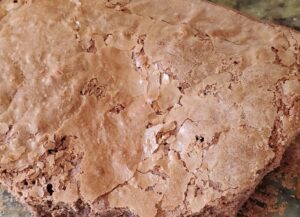 For those of you who have been reading my ‘Makeover’ Articles, you probably know by now that I love to recreate new dishes from old leftover (yet viable) ones.  This addiction started when I purchased my first Blender many years ago.  The Blender of course, then advanced to the Food Processor which has been a ‘must have’ in my kitchen almost ever since it hit the U.S. market.

Our household now consists of only two people and our appetites aren’t what they used to be and even if they were, we would be pounds overweight if we consumed everything that I baked (let alone cook) and since I hate to throw away good food (especially when i created it), I have the fun of turning these dishes into new ones.

This weeks was turning my Husband’s Brownies into new Fudge Brownies.  Ev is supposed to watch his sugar content but he still loves his chocolate and has to have his fix every night after dinner (even if it is smaller than what he had been used to in previous years.)  Sometime I manage to remember to divide the batter in half and freeze one and bake the other one.  Of course, this takes smaller pans to do so and it isn’t always feasible.

So I took the leftover Brownies which were dried out but still good and cut them up into small pieces which I then put into the Food Processor with the Chopping Blade.  I pulsed the Brownies pieces until they were broken up into much smaller pieces.  I then turned the Processor on full speed and chopped up the small pieces to resemble a coarse flour or meal.  Next step was to measure the resulting Chocolate Crumb.

The ingredients including the Chocolate Crumb are listed below:

DIRECTIONS ARE AS FOLLOWS:

1.  Return the Chocolate Crumb to the Food Processor. 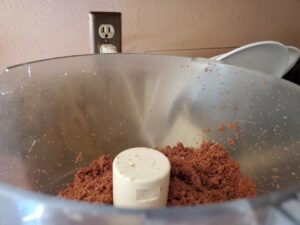 2.  Add the Flower, Cocoa Powder and the Sugar. 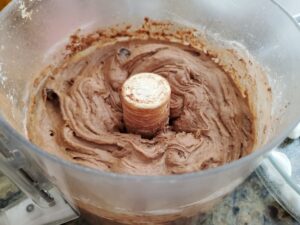 3.  Pulse, just to combine the ingredients.

4.  Add the Eggs and Sour Cream (or melted or softened Butter) and Pulse, just until the

5.  Stir in the Chocolate Chips. 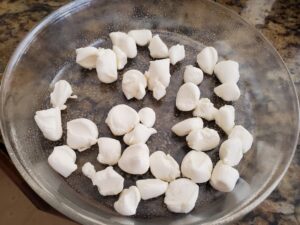 7.  Spread the Batter evenly over the Marshmallows.

9.  The Brownies may be served warm or cooled.  And they are delicious served with Vanilla           Ice Cream. 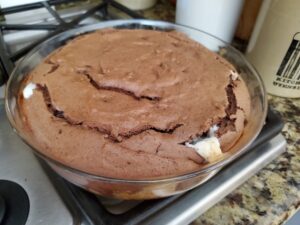