Cinco de Mayo will be here in 2 hours or earlier for East Coasters.  Here are a few recipes you can use for your Celebrations tomorrow.

We will start with Appetizers including Salsas and conclude with Rice, Empanadas and Lemonade.

Mango Salsa which makes use of fresh Mangoes, Limes, Red Bell Peppers and Jalapenos if you wish. 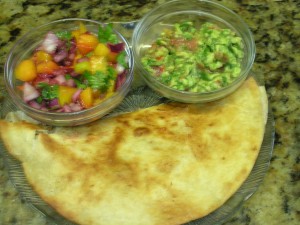 Nachos – start with good quality chips, Cheese Sauce with Jalapenos (if desired) and serve with Salsa and Guacamole. 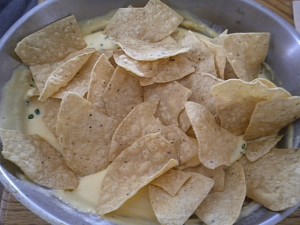 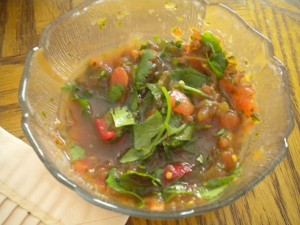 Beef Empanadas are more traditionally an Argentine Dish but they can also be found in Mexican Cooking.  The Empanada can be filled with whatever you please – diced Steak or Chicken or Ground Beef along with Tomatoes, Onions, Cheese and maybe some Chilies. 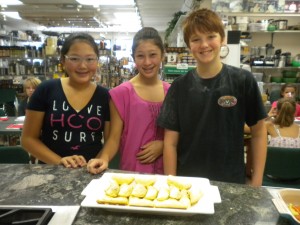 Beef Empanadas…made in one of my classes.

Sparkling Lemonade – we first had this in Acapulco and I have been making Lemonade this way every since.  It is delicious, refreshing and a great accompaniment to any meal. 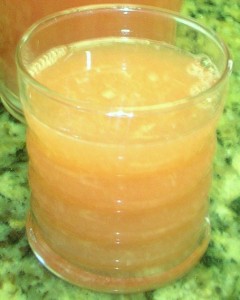 Lemon Juice is an ‘Anti-oxidant’ – a product that protects the surface of other foods from the oxygen in the atmosphere.  Oxygen reacts with foods like Bananas, Apples and Avocadoes and turns them an ugly dark color and makes the food lose their palatability.

Lemon Juice is also an excellent and necessary ingredient in many baked goods, entrees and beverages.

Entrees that require or are enhanced by the addition of Lemon Juice are:

Condiments that use Lemon Juice are:

Baked goods that use Lemon Juice are:

Beverages that use Lemon Juice are:

Lemon Juice is also a great flavor enhancement for fruit such as Melons, Berries and Tropical Fruit such as Mangoes and Papaya.  If you have a lemon tree that provides you with an abundance of lemons, squeeze them and freeze the juice in ice cube trays for easy use whenever you need them.

It is Friday and we have gone through many culinary avenues this week and do not wish to repeat anything, so it is time for Chicken.  We both love fried Chicken, but since the weather is warm and I really did not want to start frying anything, we decided on Chicken Salad.  Since all we needed for the salad was enough chicken to feed the two of us, I decided on purchasing a chicken breast rather than the whole chicken.

Since it was only a breast that we needed, I decided to splurge and purchase a free range organic chicken breast.  The difference in flavor and moistness, between this type of chicken and the normal supermarket ones is astronomical.  The organic, free range chicken reminds me of the chickens that we used to get delivered years ago when we lived in Granada Hills.  A poultry company called Bob’s Poultry use to deliver Chicken and Eggs directly to our home and there was nothing like those chickens.  They were so good!  In those days, I had to cook at least 2 Chickens at one time!  Later on it was three!

Along with the Chicken Breast I purchased some white corn and an Orange Honey Dew Melon and some Croissants to go with the meal.

To make the Chicken Salad I poached the Chicken Breast in some Madera Wine with fresh Pineapple Sage Leaves, fresh Greek Basil and freshly cut Chives.  All the herbs were direct from our garden.  I placed the Chicken Breast in the poaching liquid, brought it up to a simmer and cooked them for about 10 minutes and then shut the heat off.  You can cut the breasts in half to make sure they are done or you can use a poultry thermometer.  One hundred seventy degrees is more than done!

Along with the Celery were some more snipped Chives, Gherkin Pickles which I diced and a Pink Lady Apple, which I quartered, cored and cut up into bite-sized pieces.  I leave on the skin, because the color adds a nice contrast to the white Chicken Breast. 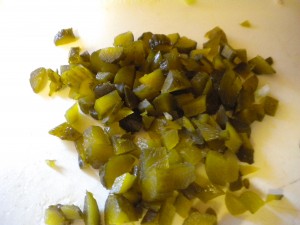 Even off the bunch of Chives before starting to snip them 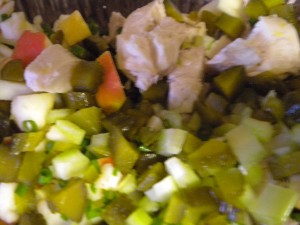 The Ingredients before mixing with Mayo and Chives 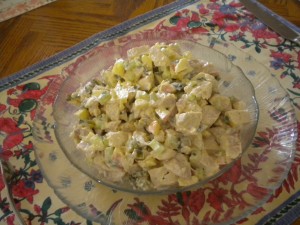 Ev husked the Corn and I washed it and made sure all the silks were off.  To cook the Corn, I placed it in my steamer with water in the lower portion and steamed the Corn for 1 minute.  Young fresh Corn does not need to be cooked for more than 1 minute – all you want to do is to get it hot – young fresh corn even tastes good raw.  In fact, I always taste it before cooking it to make sure it is sweet.  If it is not sweet you can add 1 Tbsp. Sugar and the Juice of half a Lemon to the Water and then just cook it directly in the water which should not be more than 1 inch deep.  Again, do not cook it more than 1-2 minutes unless it is old and tough and in which case you should not even be eating it off the cob. 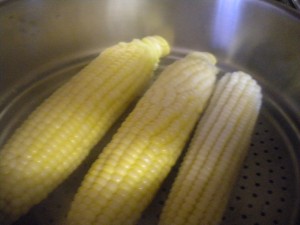 For our Beverage we had Ginger/Peach Sun Tea brewed in the sun with orange slices and fresh ginger. 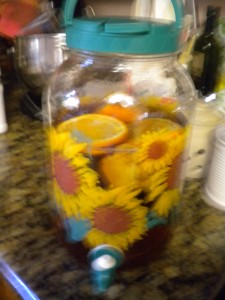 This was just one variation on Chicken Salad.  There are hundreds of ways that you can prepare it.  Chicken Salad can be an Hawaiian Variation, Chinese Chicken Salad, Thai Chicken Salad, and on and on.  Just use whatever you have on hand and what you think will go well with Chicken.  Don’t forget that Chicken Breast has somewhat of a neutral flavor that can be enhanced with most anything!  Even nuts and noodles will work in a Chicken Salad!

Saturday, June 2nd was the day of our Parent/Chlid Pizza Class at Let’s Get Cookin’.  Four Teams of 2 parents each made Piizza Dough, their own indivual pizzas and pizzas to share.  Everyone was very involved and had a good time.  The class ended with everyone enjoying a lunch of Pizza, Salad, Italian Sodas and Dessert.

The items that were made were: 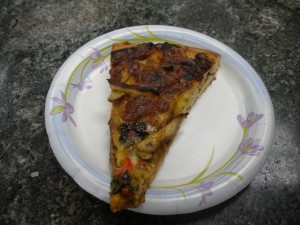 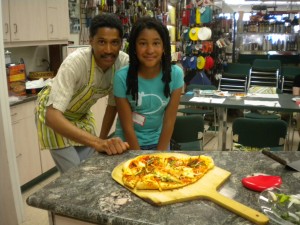 Derek & Sabrina with their Hawaiian Pizza 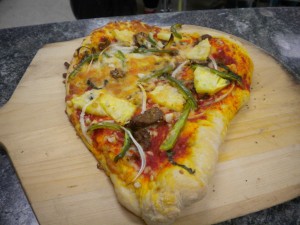 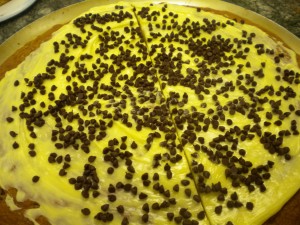 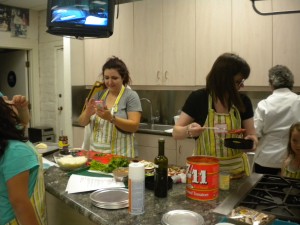 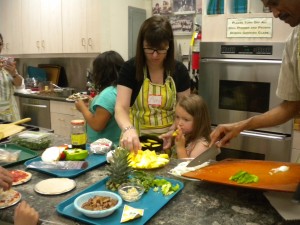 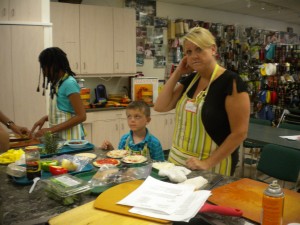 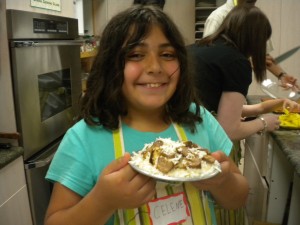 Celene with her Pizza 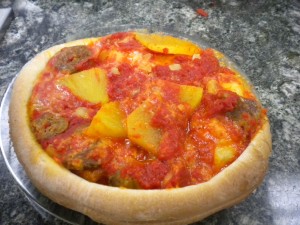 The Upside Down Pizza shown below was made with a new pan, made especially for making a ‘Deep Dish Pizza’ which is made ‘upside down’.  It was fun to do.  The pan can be purchased at Let’s Get Cookin’ in Westlake Village, CA. 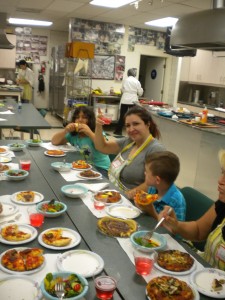 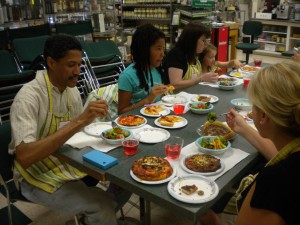 Everyone enjoyed making and eating their pizza and also had items to take home as there was just too much to eat all at one time.  Our next Parent/Child Class is July 14th and will include various items from Europe such as Arrabbiata Pasta from Italy, Roman Salad,  Monte Carlo Tea Cookies and Circus Snow Cones.