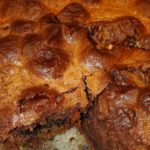 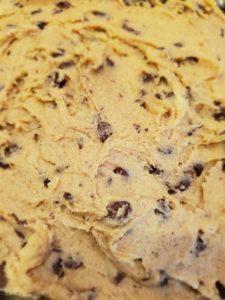 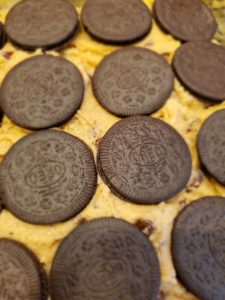 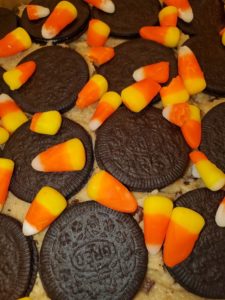 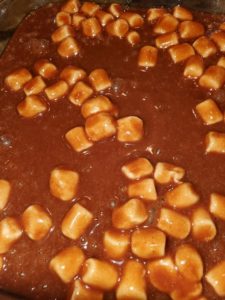 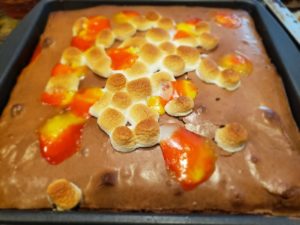 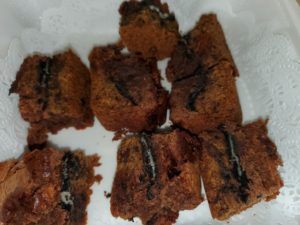 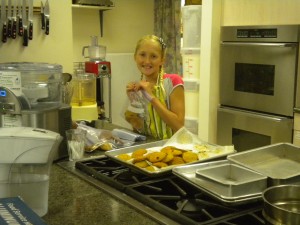 October is ‘National Apple Month and what better time to talk about, eat and use Apples in Desserts, Snacks and Meals.  Here is an Alphabetical list of some of the Apples available.  There are so many, it is almost impossible to be able to keep track of them all.  We all have our favorites but it may be fun to try a new one or two.  Keep on eye for some of the ones listed below.  There is at least one for every letter of the Alphabet except for the letter ‘X’.  If anyone knows of an Apple beginning with an ‘X’, please let me know.  At the end of this list are links to Apple Recipes in this Blog.

MONTH OF THE PUMPKIN

October boasts of 13 different food Titles.  Except for two (Eat Country Ham Month and Vegetarian Awareness Month), all are National Food Months) A few among them are ‘National Caramel Month’, ‘National Popping Corn Month’ and ‘National Chili Month’.  However, I think one item is missing and that this should also be ‘National Pumpkin Month’ or at least ‘Pumpkin Month’.  This is the time when the Pumpkins are making their way into the markets for Halloween and Thanksgiving and possibly even December Holiday Meals.  Therefore I am declaring October the ‘Month of the Pumpkin’.

Think of all the things that can be done with Pumpkin and I am not just talking about ‘Jack O’ Lanterns for Halloween.  I am talking about ‘foodstuffs that can be made with Pumpkin’.  There are at least two different types of Pumpkin on the market.  One are the larger Pumpkins which are used for carving ‘Jack O’ Lanterns’ and other Fall Decorations.  Then there is the ‘Sugar  Pie Pumpkin’ which is used for baking and cooking.  This is the Pumpkin that this blog will be dealing with.  For those of you who think that Pumpkin does not taste good, you have another guess coming.  Combined with spices, sugar and other ingredients Pumpkin can be very tasty and quite delicious.  Pumpkin is rich in Beta Carotenes which provide Vitamin A, a necessary nutrient for ‘Night Vision’ and other bodily functions.

Just what is a Pumpkin?  Well, first of all it is a fruit that belongs to the squash family.  All squash are classified as fruit because they bear seeds thereby making the shell that contains the seeds the ovary.  The meat inside the shell (skin) is edible and can be cooked as is or chopped or ground or pureed and can be baked, stewed, or made into Ice Cream, Shakes and Smoothies.  My favorite use for Pumpkin is in Pumpkin Bread or Pumpkin Waffles.  Roasted Pumpkin Seeds are also a favorite among many people.  In addition, the seeds contain Oil which is also used for culinary purposes

Starting today you can check for recipes to try.  For starters, go to the links below.  These are delicious for your Thanksgiving Dinner or Breakfast. 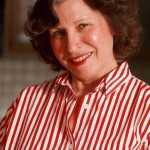 We all want our children to be well-rounded and aware of other people throughout the world.  What better way to introduce your children to the variety of cultures than through Holidays and the food associated with them? Every culture in the world has their holidays and customs and food is almost always a part of them.  A Holiday or Celebration occurs in almost every month of the year starting with January.

Chinese New Year’s usually occurs in January although sometimes it does occur in February.  This year, 2012, it starts on January 23rd and is the Year of the Dragon.  There are 12 Zodiac signs that signify each of 12 years in the Asian Culture.  In addition, the Dragon has five different elements that are associated with it and give an added dimension to the Dragon personality.  They are Earth, Wind, Fire, Water and Metal.

In February there is Valentines and Groundhog Day. For most of us, Valentines is a day for Romance and anything with hearts on it is usually part of the celebration along with sweets and roses.

March brings in St. Patrick’s Day and Mardi Gras in some cultures throughout the world.  Easter also sometimes falls in March, though most of the time it comes in April.

May brings in May Day which is still celebrated in some areas of the world.  In Hawaii, May 1st is Lei Day.  The second Sunday in May in the United States is Mother’s Day.  In Mexico, the 5th of May is celebrated as Cinco de Mayo which is the day that the Mexican Army defeated the French at the Battle of Puebla.  May is a wonderful month and is full of flowers and promises of summer to come.

June is the month of weddings and the third Sunday in June is Father’s Day.

July of course is the celebration of the Independence of the United States.  Wonderful celebrations occur on the Fourth of July with picnics, festivals and fireworks. Bastille Day which occurs on July 14th in France is also a cause for celebration.

August is a wonderful summer month with vacations, picnics and beach outings.  On August 12th in Thailand Mother’s Day is celebrated.  The manufacturer’s make T-Shirts which are purchased by many people in Thailand.  The theme for these shirts is ‘Love Mom’ and I am fortunate to have several of them which I received from my Thai based son and wife.  August 12th has been chosen as Mother’s Day because this is the Queen’s Birthday.  Someday when a new Monarch is reigning then Mother’s Day will change accordingly.

September in the United States is Labor Day which for many signifies the end of summer and the beginning of another work or school year. September 16th also Mexican Independence Day. Late September or early October is also the observance of Rosh Hashanah, the Jewish New Year and Yom Kippur, the Day of Atonement.

October brings in All Hallows Eve or Halloween as it is known in Western Countries.  The Day after Halloween is known as the ‘Dia del Muerte” or the Day of the Dead in many Latin based countries.

December is probably the month most waited for by many people, especially children.  During December we have Chanukah, The Festival of Lights and Christmas and Kwanza.

Look monthly for our coverage of current holidays and the food customs that accompany them.  The first one to look for will be the Lunar New Year which is observed in most Asian countries and is recognized
even in Western countries.

You can also read about the Year of the Dragon and gain a couple of recipes by going to http://ezinearticles.com/?The-Year-of-the-Dragon&id and reading my article on The Year of The Dragon. 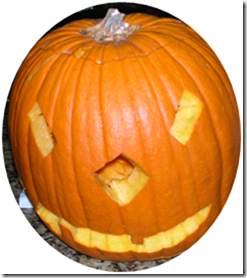 Halloween or ‘All Hallows Eve’ is almost upon us again.  What better time to create goodies for the crowd, big or small.  If you are having a party, half the fun is in the food.  Food for Halloween should be almost as spooky as the night but still taste good.  Also, the simpler you keep it, the easier it will be to manage.  Finger food is probably the best way to go for a Halloween Party, whether the guests be young or old or just young at heart.

Let’s start out with the savory items and then proceed to the side dishes and sweets.  Hot dogs are always good for Halloween and can be prepared in many ways.  Just a few are Goblin Goulash, Hot Dogs on a Stick and Chili Dogs, http://sylveeeskitchen.com/recipes/lunch/monster-chili-dog/.  Chili dishes, Hot Wings and Shrimp Skewers are also goo savory dishes.

Appetizers can be Monster Eyes (Deviled Eggs created to look like eyeballs), http://sylveeeskitchen.com/recipes/appetizers/halloween-monster-eyes/ or Black Bean Dip with Carrot Wands.  Goblin Salad or a Spooky Fruit Salad will go well with chili dishes.  Add some French Fries or Onion Rings and Mashed Potato Balls and your meal will be almost complete.

A Halloween meal is not complete without dessert or a beverage.  For dessert, there can be decorate your own cupcakes, popcorn balls or licorice ice cream.  One of the desserts can be your table centerpiece and that would be a Halloween Cake or Spooky Goblin Train. Beverage of course would be Witches Brew. 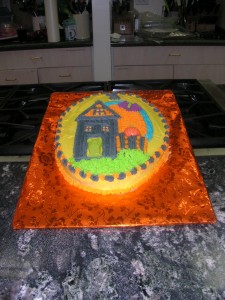 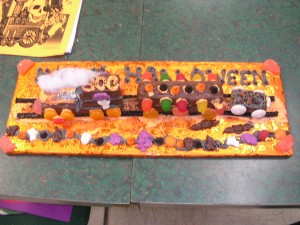