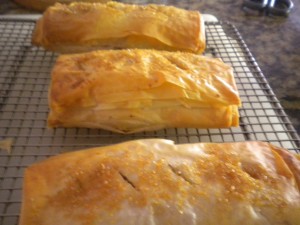 Apple Strudel is of German and Austrian origin but is also popular in Italy and the Balkan Countries.  This recipe calls for Filo Dough which is very similar to strudel dough; making strudel dough is an art which requires a large kitchen table to be able to stretch it properly

Note:  The Strudels pictured above are actually mini-portions made with just 1 sheet of phyllo Dough Each.  Just place the Apples about 4 inches in from the left short end and butter, wrap and fold as for the larger version.