September is ‘National Biscuit Month and today is the last day of September so we have to take last minute advantage and promote Biscuits.  Biscuits are just one of those foods that provide comfort and joy – they are good for Breakfast, Lunch or Dinner or even Snack Time.  Most Biscuits are made from a Baking Powder or Baking Soda Recipe but there are some that are leavened with Yeast.  There is one of each in the Baking Recipe Section of this Blog.  Try them and then let me know how you like them or don’t.

Baking Powder Biscuits are more commonly made and served than Yeast Biscuits.  Baking Powder Biscuits are made from a shortened Dough, which means that a Shortening Product either animal or vegetable is cut into the flour to shorten the wheat fibers which in turn helps to tenderize the product.  A Flour and Water product would pretty much taste like hardtack whereas a product that has a fat in it will be tender and flaky, if made properly.  The recipe referred to within this blog is a standard Baking Powder Biscuit and can be enhanced by adding other products to the mixture such as herbs or cheese.  Try them in various ways and see what you can come up with.  In addition to using them as a bread product for dinner or lunch, they can also be used as dessert.  Strawberry Short Cake is called ‘Short Cake’ because a traditional Strawberry Shortcake is made from a shortened Dough which means that some type of fat has been cut into the flour to tenderize it.  For Strawberry Shortcake you can make one large biscuit in a 9″ round pan and then cut it in half to make two layers.  Fill the middle with Whipped Cream and sliced Strawberries and do the same to the top layer after you put it on the filled bottom layer.  You can also make individual portions by making 4 or 5″ round Biscuits.

Pictured below are the ingredients needed to make  Baking Powder Biscuits:

Pumpkin Yeast Biscuits are unusual in that they contain Pumpkin, a product which is not usually found in Biscuits and they contain Yeast.  Most Biscuit products are leavened with Baking Powder which is a chemical leavening agent.

December 30th is ‘National Bicrbonate of Soda Day’. I suppose it may be a good time for such a day in that many of us have or will probably overeat while celebrating the Holidays and may experience some indigestion.  Even though Bicarbonate of Soda or Baking Soda is usually used more for baking than anything else, it does have its uses as an antacid.

The most common and frequent use of Baking Soda is as a leavening agent for baking, therefore its name which it is more commonly referred to as is ‘Baking Soda’.  It is composed of Nitrogen, Hydrogen and Carbonate (CO3) which is one molecule of Carbon and 3 molecules of Hydrogen.  Baking Soda is used as the leavening agent in baked products which contain an acid as Baking Soda requires an acid to activate it.  Once the Baking Soda is activated it releases CO2 which as we know is a gas and rises as it is released.  The rising takes place in the form of small bubbles. which cause the other ingredients to expand, thereby making the baked product rise.

Baked products which do not contain an acid generally use Baking Powder as the leavening agent.  Baking Powder can be purchased in the Baking Section of the Market, but if you are in the process of making something that requires Baking Powder and you find that you have run out, you do not have to run to the market to buy some.  The reason for this is that Baking Powder is actually Baking Soda which has been mixed with Cream of Tartar (an acid) and starch as a filler.  Of course, you do have to have Baking Soda on hand.

The next time you run out of Baking Powder and do have some Baking Soda on hand, use the equivalent shown below.

If you don’t have Cream of Tartar you can use an equivalent amount of Lemon Juice or other acid product, however Lemon Juice or Vinegar will alter the flavor of your product.  Actually Lemon Juice usually gives a nice flavor to baked goods so that would be not be detrimental, however if using vinegar, you definitely want to take into mind that vinegar can change a baked product adversely and that is, not good.

You can also use a mixture of Baking Soda and Warm Water to clean your windows if you have nothing else on hand.

Toothpaste – if you run out of Toothpaste, you can use a paste made from Baking Soda and Water to brush your teeth.  The taste may not be too good, but it does get the job done.  Some brands of Toothpaste even have some varieties which have Baking Soda in them.

Antacid – Bicarbonate of Soda when mixed with water and drunk works well as an antacid.  The proportion for this task is ½ tsp. of Baking Soda mixed with half a glass of water (approximately 4 oz.)  It is best to drink it down as quickly as you can as it does not taste very pleasant.  (Baking Soda has a somewhat salty taste) 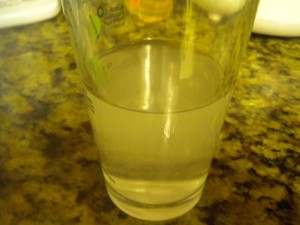 1/2 tsp. of Baking Soda in 1/2 glass of water acts as an atacid for the relief of indigestion

Burn Relief – to relieve the itching and pain of too much sun, add some baking soda to lukewarm bath water and soak in it.  For minor burns make a paste of baking soda and water and apply to the burned area for soothing relief.

Baking Soda is one of those products however miniscule that really make a difference, especially when it comes to baking.  Be sure and keep at least one box on hand in your kitchen at all times.