Having been sort of neglectful on the Diary Front, here is a blog I forgot to post.

From the 24th through the 27th we were in Imperial Beach down near the Tijuana Border to do some Birding.  We saw 73 different species of birds and added two new ones to our ‘Life List’.  The new birds we saw were the Red Faced Comorant and the Beldings Sparrow.    We went through La Jolla on our way home and saw tons of Breeding Brown Pelicans and more Cormorants in their rookeries.  In addition we saw many seals; adults and pups.

The food we ate during this trip was forgettable but the food we are now eating at home is not, so let’s get down to brass tacks and actually talk about my Culinary Activities.

Since Wednesday, May 2nd is ‘National Truffle Day’ I decided to make the centers for some Truffles which I will serve to my Mah Jong Group on Wednesday. (The Blog just below this one)  Of course, Ev also needed his ‘Chocolate Fix’, so I did that as well.  It was time for Brownies and Ev decided he wanted some with Chocolate Chips in them, so I took it one step further and made White Chocolate Brownies with Semi- Sweet Chocolate Chips.  As so often happens, the Chocolate Chips were heavier than the batter and sank to the bottom of the pan, but this was okay, because when they baked, it was like having a layer of pure chocolate at the bottom.  These were especially good when they were warm and the chocolate was still gooey, but they still taste almost as good two days later. 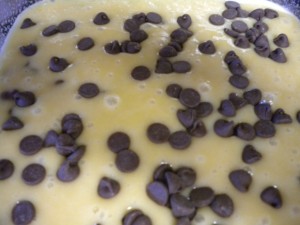 Sunday Morning was another Bake – A – Thon Day for me.  I had three things going practically all at once.  The first thing I had planned to do was to make some bread –this time Challah was on the agenda.  I made the Dough using my Kitchen Aid and then covered it with a damp cloth and put it outside in the sun to rise.  The warmth from the sun helped it to rise much more quickly than it would have done if I had left it in the house.  Since I did want to get out and go shopping in the early afternoon, this was very helpful.

Next, since the next day was National Raisin Day I decided to make some Refrigerator Raisin Cookies which are not only good for snacking but also are a quick and easy breakfast with a glass of juice or milk. 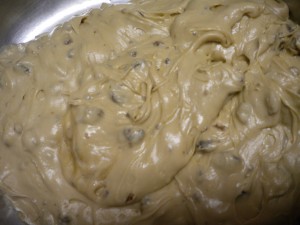 Before I was finished with the Cookie Dough, the Bread Dough had risen, so I had to bring it in, punch it down, let it rest and then shape it into loaves.  The last time I made Challah, I braided it and made one large loaf.  This time I divided the Dough into two portions, and twisted each portion.  I then placed the Dough on a parchment covered baking sheet, covered it and let it rise for 30 minutes or until 50% doubled in bulk.  The next step was to brush it with an Egg Wash and then I sprinkled it with Sesame Seeds.  Poppy Seeds are also good for those who prefer them or for variety, use Sesame on one and Poppy on the other.

Thirty minutes later, the Bread had risen sufficiently to bake it, so I heated the oven to 375 degrees, making sure the baking rack was at the lowest level, close to the heat source.  This insures that the bottom of the bread bakes as well as the top and sides.  Just before placing the loaves in the oven, I misted them lightly with water.  (This helps to insure that you have a good crust)  Thirty minutes later the bread was completely baked.  I took the pan of bread out of the oven and set it on the stove to cool slightly.  When the loaves were cool enough to touch, but still warm, I put them on a cooling rack to finish cooling. 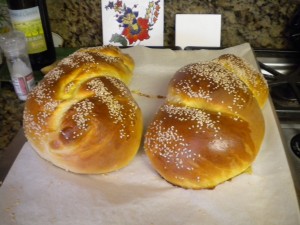 While the Bread was rising I finished the Cookie Dough, transferred it to a bowl and placed it in the refrigerator to set up.  At this point I cleaned up the kitchen, got dressed and went out and did my shopping.

When I returned from shopping, I divided the Cookie Dough in half;  shaped one half into a roll 2 inches in circumference and about 12 inches long and then wrapped it in plastic wrap. 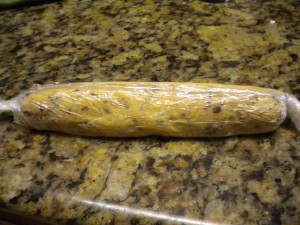 Normally, you would just refrigerate this and then slice off the cookies and bake them as needed.  I decided just to scoop half the dough and then freeze the roll for use at a later date. 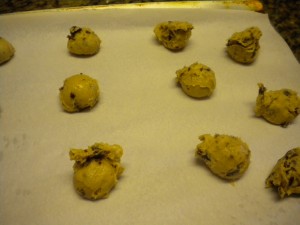 The scooped cookies baked in about 14 minutes.  I love raisins and caramel and the use of brown sugar in this cookie gives it a distinct caramel taste.

Having finished with the baking and candy making, I put away the groceries and then took a rest.  At 4:30 I proceeded to start preparations for dinner.  Tonight was going to be Meatloaf.  This is another item, that I find it just as easy to make more than one, so I made a double recipe, shaped the loaves, wrapped one and froze it and then placed the other in my baking pan.  I scrubbed some Potatoes to put in the oven along with the meatloaf. 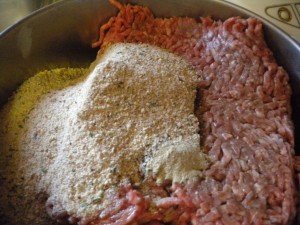 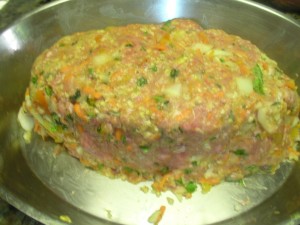 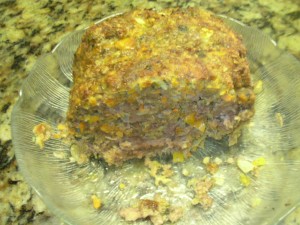 For our vegetable we had Broccoli sautéed with Olive Oil and Basil.

BLT’s – Classic and Not so Classic

We had Classic BLT’s for dinner the other night and that got me to thinking of all the ways in which the BLT can be altered. How many versions can you think of or create?  Well, that is what I am planning to do with this blog.  The Classic BLT is simply Toast with Lettuce, Tomato, Bacon and Mayonnaise.  While the Classic BLT is very tasty, the ‘not so classic’ versions are really much more interesting and tastier.  Anyone can come up with their version of a BLT but for starters I will list and describe a few below.

Our favorite is the BALT which is a Bacon Avocado, Lettuce and Tomato Sandwich.  Our bread preference is rye or Challah (Egg Bread) and we like it lightly toasted.  Mayonnaise  goes on the bread with sliced Avocado next and then the Bacon, Tomato and Lettuce.  You can go a little further and add some sweet Vidalia or Maui Onion slices and create a whole new taste sensation.  Another item that can be added is sliced Black Olives.  Where can you go from here?  Add your favorite condiments and the taste changes yet again.

Another favorite version of mine is an Egg Sandwich on Rye with Bacon and Tomato and of course Mayonnaise.  Go a step further and add a slice of cheese to the hot Egg before adding the bacon and you have the nice sensation of melted cheese along with the Egg and Bacon.

How about a BLT on a French Roll with sautéed Onions and Red & Yellow Bell Peppers?   Instead of regular Bacon, try it with Canadian Bacon, Proscuitto or Pancetta.  (Pancetta is Italian style Bacon.)  Add some sliced Turkey or grilled Chicken Breast and you have a Club Sandwich.  Get a little more daring and add some Peperoncini or sliced Jalapenos to the Roll.

Create a different kind of sandwich and wrap the Bacon, Tomato and Lettuce in a Tomato or Spinach Tortilla and have a BLT Wrap.  In this case, some mashed Avocado spread on the Tortilla before it is wrapped around the other ingredients would be very good.

Have you ever tried a BLT with Peanut Butter spread on the bread?  If you are a Peanut Butter lover and a BLT Lover, you would get two of your favorites in one sandwich.  If anyone out there tries it, please let me know how you liked it.

One last thing, don’t forget the Grilled Cheese BLT.  There has been a big resurgence of Grilled Cheese Sandwiches and nothing adds to the flavor of Cheese more than Bacon does.  You might want to leave out the Lettuce on this one, so you would have to call it a Grilled Cheese BT. Whichever way you make yours, enjoy!