MY CULINARY DIARY – Shrimp and Pasta

Today was a Culinary Half-Marathon.  Since we were almost out of bread, I decided to make some Country White Bread.  I once got a T-Shirt at one conference or another that had the White Lily Flour Logo on it.  I had never actually ever used White Lily because it does come from back East and I have never seen it for sale on the West Coast until about 4 weeks ago when I was browsing through Surfas, a great Restaurant Supply Store in Culver City.  There and behold was White Lily Flour! Not being able to resist it I purchased a 5lb. bag of their All-Purpose Flour and their Bread Flour.  Today, I decided to try out the Bread Flour in my Bread.  It really turned out quite scrumptious.

I made the Dough using the Dough Blade in my Food Processor and then put it in a 2 gallon plastic bag.  Before I bagged the Dough I covered it in a thin layer of Olive Oil.  This adds flavor and keeps the dough from drying out.  I did not use a recipe for the Bread but here are the ingredients I used:

1 Tbsp. Malt Powder (Sugar or Honey may be used instead)

If you make this Dough in your Food Processor, use cold water as the heat from the motor of the processor heats up the dough.  You do not want the dough to get so hot as to kill the yeast.

You can also make the Dough by hand or in a standing electric mixer.

While the Dough was rising, I took a trip to the market(s) to purchase some other ingredients. My first stop was Sprouts to purchase Shrimp and look for Rennet Tablets and Citric Acid.  Monti made Mozzarella Cheese and has inspired to try it too.  Looks very simple and fresh Mozzarella is really good.  I purchased the Shrimp, 2 boxes of Strawberries which were on sale for a very good price.  I found the Citric Acid but not the Rennet.  I did find Vanilla Powder though.  Vanilla Powder is a good substitute for liquid Vanilla Extract when you do not want to add any more moisture to a baked product, especially ones like Churros or anything fried.

The next stop was Whole Foods to look for the Rennet, but all they had were very expensive Mozzarella making Kits.  I did find some nice Mango Bath Salts though which are good for a very relaxing bath.

The next stop was Ralphs where they had Eggs on sale for 88 cents a dozen. (Limit 2 doz.)  Since I use a lot of Eggs for baking this was a good deal.

On to home and the rest of my afternoon cooking and baking.  Once I put away the groceries, I put the Baking Stone in the bottom of my lower oven and turned the oven on to 500 degrees to heat up the stone.  (It takes at least 30 minutes to heat the stone, but 1 hour is even better)  Since it was a warm day, I knew that the Bread would rise up fast, once it was shaped.  The next thing I did was to put some Cornmeal on my Pizza Peel (which I use to slip the bread onto the stone with) and shape the Bread.  I flattened the Dough to get out the Carbon Dioxide build up.  You always want to raise your dough at least 2 times, even three to get a great loaf of bread. 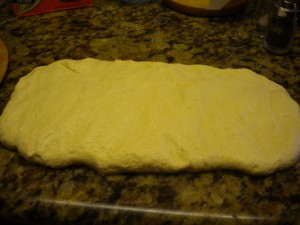 Next I shaped it into a rectangle and folded over the top third.  After flattening that as much as I could, I then folded over the bottom third and then flattened it again.  The loaf was the lifted onto the peel.  Realizing that the seam was up and should have been down, I turned over the loaf.  That is why when you look at the photos that there is cornmeal on top of the bread as well as the bottom.  This actually give some additional texture, taste and crunch to the crust.  The top of the loaf was slashed with a Baker’s Blade (Lame);  this allows for expansion and better baking. 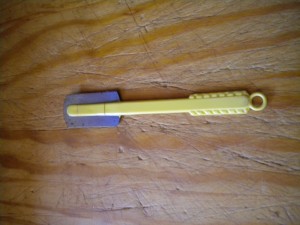 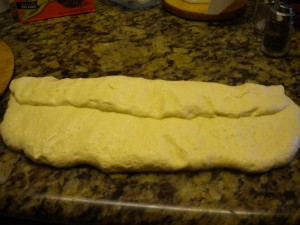 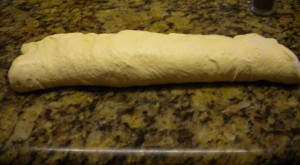 I covered the loaf with a clean dish towel and then went on to my other tasks of making Strawberry Parfait and Angel Food Cake.  The Strawberry Parfait was made with fresh Strawberries and Heavy Cream which was to be whipped.  I did not want the Cream to break down, so I measured out 2 teaspoons of Gelatin (Gelatin comes in 1 oz. Packages or 1 lb. Containers)  The one ounce package has 2 ½ tsps. In it.  I also measured 2 cups of Heavy Cream (Whipping Cream) and poured 2 Tbsps. into a small bowl and then sprinkled the Gelatin over the cold cream.  Once the Gelatin softened I placed it in the Microwave to dissolve it.  Stir it thoroughly to be sure that all the granules are dissolved.  I then poured the Gelatin mixture into the remainder of the Cream and covered it and refrigerated it to be sure it was cold enough to whip without turning into butter.

Next I placed the Strawberries in a Colander and rinsed them with Cold Water.  I set them aside to drain.

Next I made my Angel Food Cake.  Before starting this though, I made sure the oven rack was at the bottom and that the upper racks were well out of the way.  Next I turned the oven to 375 degrees.  To make Angel Food Cake, use a tube pan and DO NOT GREASE IT!

The reason I decided to make an Angel Food Cake was because I had a large collection of Egg Whites that I had saved from recipes that only called for Yolks.  I could have made a larger Angel Food Cake than I did, but two people can only eat so many sweets!

The recipe I used called for:

1 ½ cups Granulated Sugar (divided in half)

For the complete recipe see: angel-food-cake/ 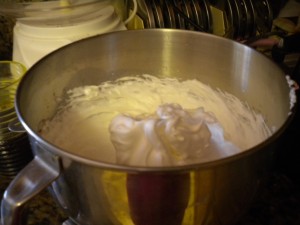 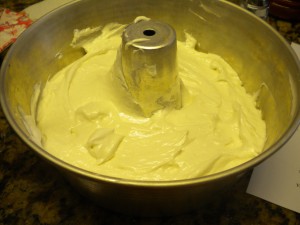 Once the cake is done remove from the oven and turn upside down until completely cool.  Run a spatula around the sides of the pan and If your tube pan is a 2 part pan, remove the sides and then run the spatula under the bottom part of the cake.  Turn over onto a serving platter.

Angel Food Cake makes a great base for Strawberries and Whipped Cream or for the Strawberry Parfait that I made next.

For the Strawberry Parfait I used:

2 tsps. Gelatin (I think 1 would probably have been enough) 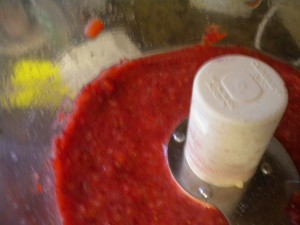 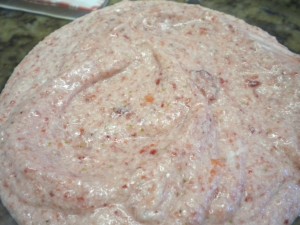 For the complete recipe and directions see:  strawberry-parfait/

Once the Parfait was done I began preparations for dinner which was Oriechetti  (Ear-shape Pasta – the name actually means little ears);  there were a few wagon wheels thrown in the the Oriechetti as I wanted to use up the small amount I had) with fresh Tomato and Herb Sauce and sautéed Shrimp.  I shelled and deveined the Shrimp and rinsed them with cold water and then blotted them dry with a paper towel.  I add some minced Basil mixed with some Himalayan Sea Salt, Olive Oil and Saffron.  (The Saffron gives color and is a browning agent – Paprika or Turmeric can be used instead although the Turmeric will add its own flavor)  You can also add some Lemon Juice to this mixture, but this time I added Marsala Wine. 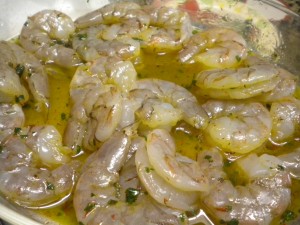 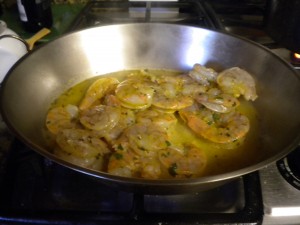 The bread was put in the oven before the Cake was put in.  As I said it was a very warm day and the loaf rose up quickly.  The bread also finished baking before the Cake.  When it was done I removed it with my peel and placed it on a rack to cool.  Ev couldn’t stand it (the aroma of freshly baked bread is so good!) and he had to have a slice with Butter of course! 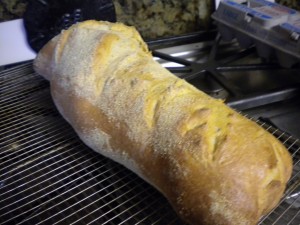 Next I washed the Tomatoes (no need to dry) and removed the cores.  Next I diced them and minced some fresh Oregano Leaves. 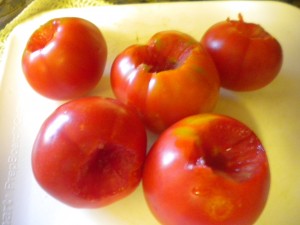 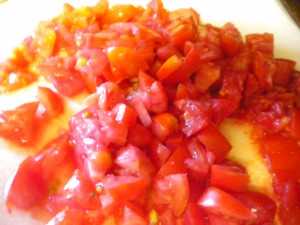 I also minced some Chives but kept them separate as they were to be used for a garnish.  Usually I grill the Shrimp (grilling adds flavor and gives more color to the Shrimp) but since I already had several pots and pans on the stove, I decided to sauté them instead in the pan that I was using  for the Sauce.  Once the Shrimp were sautéed I removed them to a dish and covered them until the sauce was done.

To make the sauce, add a small amount of Olive Oil to the pan and add some diced Onions.  Sauté until the Onions start to soften and then add the Tomatoes along with the fresh herbs and 1 tsp. of Sea Salt and some freshly ground Pepper to taste.  Cook until the tomatoes are reduced and a sauce start to form.  If desired, you can add a little Marsala to the Sauce but be sure to cook it down somewhat.

While I making the Sauce I cooked the Pasta in plenty of boiling salted water.  Once it was done, I poured it into a Colander and shook out all the excess water.  Once the Sauce was done I put the drained Pasta on top and surrounded it with the Sautéed Shrimp. 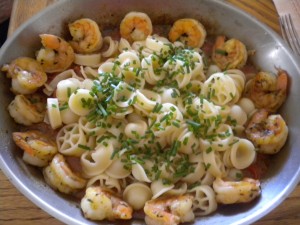 In addition to the Shrimp and Pasta we had the freshly baked Bread and some sautéed Spinach to go along with it.  All in all it was a delicious meal followed by Angel Food Cake and Strawberry Parfait. 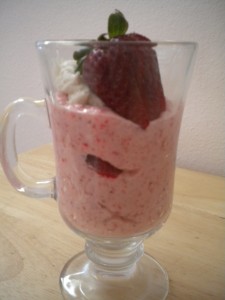