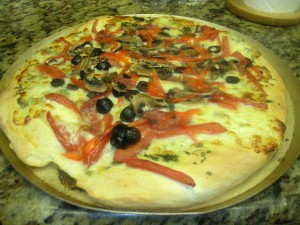 It is Pizza Time Again!  Last time it was Pita Pizza to use up the extra pita bread we had in the refrigerator.  This time it is traditional pizza to use up the fresh tomatoes that won’t last much longer without being cooked.

Some of you may think that making your own pizza is very time consuming and too much work, however, it can be made rather simply and in a short amount of time.  If you make your dough from scratch, you can figure on about an hour and a half of preparation time including the time needed for the dough to rise.  So if dinner is planned for 6 PM you would probably want to start by 4 PM with the dough preparation.  (The rising time for the dough depends on the air temperature surrounding it)

You can also purchase readymade dough from stores such as Trader Joe’s, Fresh & Easy or your local Italian deli.  I find that making the dough is so simple and tastes so good (when you make your own) that I always make my own dough.  What happens though when you are going to spend most of the afternoon out and will not be home until an hour before dinner is to be served?  Here is my solution:

Postscript:  In the photos there is a piece missing from one edge of the pizza;  the dough didn’t quite stretch this far & I eventually gave up trying to force it.  Doesn’t change the taste, only the aesthetics. 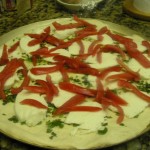 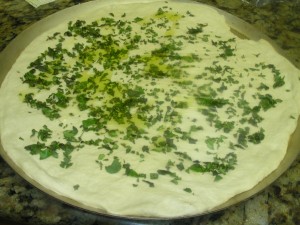