Day Seven was Saturday and again, I will skip breakfast as that wasn’t notable.  For lunch we had a combination plate (items purchased from the market) of Tako (octopus) Poki Hawaiian Style Ahi Poki and Lomi, Lomi Salmon with seaweed snacks and sliced cucumbers. This was a very tasty and light lunch and it was completely satisfying.  It met both flavor criteria and a minimum of calories if you are watching your weight, yet after eating this we felt completely satisfied and not the least bit hungry.  Poki and Lomi Lomi is made with marinated raw fish.  The marinating takes the place of cooking and the other ingredients such as onions and chilies add flavor.  If making these dishes at home, only use the freshest of fish or fish that has been labeled Sushi quality.  In the photo below, the dish in the upper right is Tako Poki, next to is the Lomi Lomi Salmon.  Lomi Lomi is usually pretty mild in flavor.  In the lower half of the picture is the Ahi Poki;  the Ahi  was Hawaiian Style and had lots of flavor but practically no heat.  The Tako on the other hand was spicy. 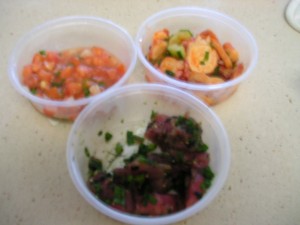 For dinner we purchased some Ono  from the market and cooked it Island Style with Soy Sauce, freshly grated Ginger, Sesame Oil and the leftover Lomi Lomi Salmon.  To make it, I heated up the pan and added the Lomi, Lomi, a little sesame oil and the ginger.  Then I cooked the ono on each side (it doesn’t have to be cooked all the way through) and added the soy sauce.  Along with the Ono we had [amazon Jasmine Rice purchased a bag of Jasmine Rice that contained sliced, dried carrots and other vegetables.  Along with this I sautéed some Baby Bok Choi, Scallions and fresh Basil.  This made a very tasty meal.  Dessert again was Brownie Bites and Ice Cream Sandwiches.

Additional pictures of our food preparation can be viewed on Flicker.  Click on the Flicker Link and look for Kauai Food Pictures. 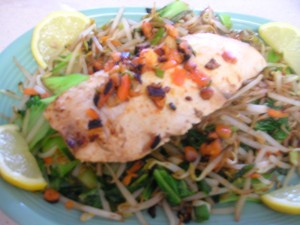 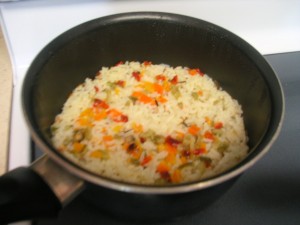