The Hawaiian Islands are one of our favorite vacation spots;  Maui is one of those spots in the world where you feel different as soon as you step off the plane.  The warm flower scented breezes caress you skin and make you feel relaxed and dreamy.  What better place in the world than to enjoy the food that has been created in the Hawaiian Islands.  While locally caught fish is the protein mainstay of the Islands other meats are delicious as well.  Pork is one of those proteins that are done beautifully in the Hawaiian Islands.  Today’s Hawaiian Cuisine is a blend of the tropical with Asian flavors, two of my favorite flavor profiles.

One of the restaurants in Kihei is ‘Café O’Lei’, a restaurant which specializes in locally caught fish and however incongruently, steak.  That being said, when we ate there on Friday Night neither one of us had fish or steak.  My choice was the Asian style Shortribs and Ev had the Macadamia Nut roasted Pork which of course  is an Hawaiian favorite.  Both dishes were served with Rice and Vegetables along with a delicious first course salad.  For dessert we shared the Pineapple Upside Down Cake.  When we go back to Maui I would like to go back to this restaurant and try the raw fish or Sashimi Stacks that are one of their signature dishes.

One of the Items I purchased at the Tropical Plantation that we went to on Monday was a package of Gourmet Pancake Mix made in Hawaii.  Since there was a waffle iron in the Condo, I decided to make Waffles for Breakfast on Saturday Morning.  Even though the mix had dried Eggs and Buttermilk in it, I added fresh Eggs and Milk along with melted Butter to the mix to make a richer waffle.   We had Coconut Syrup (made in Hawaii) on the Waffles and Bacon and Coffee on the side. 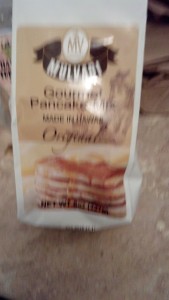 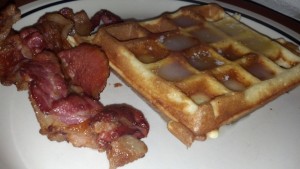 After Breakfast we drove to Kaanapali to go to the 25th Annual Maui Onion Festival.  Many Chefs from around the Island were participating in a recipe contest.  We were able to view the demonstration by Chef Chris Coulis in which he made an Hawaiian Onion Gnocchi with a Onion/Tomato Confit.  It was quite delicious as we did get to taste it.  The participating chefs had their wares displayed on tables set up near the stage.  And of course right near the stage and in full visibility were 50 lb. bags of Maui Onions.  Maui Onions are just like the Yellow Onions found here in California except that the soil that they grow makes a difference in the taste.  The Volcanic soil of the Hawaiian Islands somehow yields a sweeter, less pungent onion than California and other States produce.  They are so sweet that you can just about eat them out of hand!  Of course you can’t to an Onion Festival and not have Onion Rings.  These were being cooked right on the spot by about 12 different people to keep up with the demand.  And they were very good!  You had your choice of Caramelized Onion Ketchup or a spicier type dip.  We opted for the Caramelized Onion Ketchup.  What else would you eat your Maui Onion Rings with? 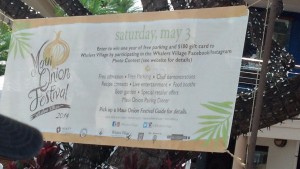 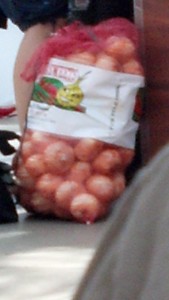 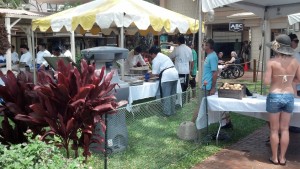 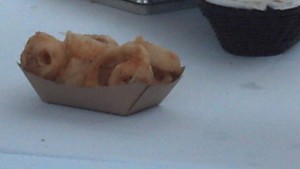 In addition to tasting the Gnocchi I purchased some Shortbread Cookies from the Honolulu Cookie Company.  They have many different varieties and when you go into the shop you can sample as many types as you wish.  Since Ev likes Chocolate and I like everything else, I bought a pack (my choices) of both Chocolate and Macadamia Nut/Pineapple Cookies.  Needless to say, they did not last us very long.  They were quite delicious. 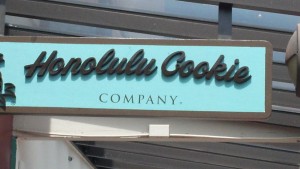 For dinner this night we went to Rita’s Steak House where Ev had the Sirloin Burger and I had the Mussells Molokini which were just stamed Mussels in a White Wine Butter Sauce, but were very tasty.  Along with this I had a Salad and Rolls and Butter. 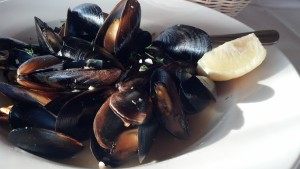 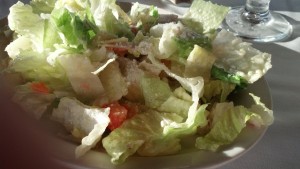 The next day was Sunday and for dinner we went back to Coconuts Fish House.  Ev again had the Fish and Chips and I had a Seafood Salad.  Usually when you go to a restaurant and order a Seafood Salad there will be small pieces of Fish or small Shrimp in it.  Not so the case here.  There were two or three large pieces of fish including Mahi and Ahi along with 2 large Shrimp. 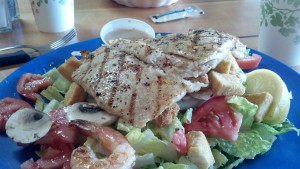 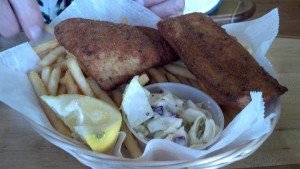 Fish and Chips at Coconut

Needless to say Fish in the Hawaiian Islands is outstanding – fresh and delicious.

Just about one year ago, I blogged about our Food Odyssey on the Hawaiian Island of Lanai.  This year we spent our tropical vacation on Maui and did eat some very good food so I am going to talk about it here and display some photographs.  Maybe even give some recipes.  Hope you will enjoy this tropical respite.

Since we live on the west coast of the United States during the Daylight Savings time we are 3 hours ahead of Hawaiian time or Pacific Standard Time.  Our plane left Los Angeles at approximately 8:30 PDT and arrived in Maui at 10:30.  Even though we had eaten at the Airport and had some snacks on board, my husband was still up for breakfast.  We stopped at the Azeka Plaza and ate our Sunday Brunch at Amigos Mexican Restaurant.  Ev had the Banana/Macadamia Nut Pancakes (definitely Hawaiian style) and I had the Shrimp Ceviche.  Ceviche is very similar to the Hawaiian Poke (a marinated fish dish) so I really was right in keeping with the tropical food theme.  The pancakes huge which made me glad that I didn’t order them because I would only have been able to eat about half.  The Avocado Shrimp Ceviche was perfect for me.

After eating we went to our Condo Complex and checked in.  Fortunately, even though we were early our unit was ready for us.  We had a fantastic garden and ocean view with palm trees waving and two fountains operating.  After unpacking and resting a while, we went out to pick up some food essentials for our stay here.  Before shopping, we decided to eat dinner and ended up in a small place called King’s Chinese Barbecue.  We had delicious Roasted Duck and Vegetable Chow Mein.  The seating was outdoors and was right across the street from the beach, so again we had the ocean view and the palm trees waving, even though there were cars driving down the street in front of us. 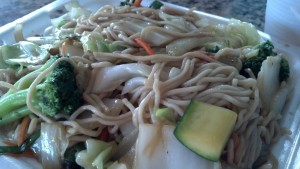 We purchased Blueberry Muffins, Hawaiian Vanilla/Macadamia Nut Coffee, Half & Half, Turbinado Sugar (grown and processed on Maui) and a few other things such as juice and soft drinks.

The next day after a Breakfast of Cornflakes and Coffee we went to the Kealia Ponds which have been designated as a bird refuge.  One of our major hobbies is ‘birding’ and when in the tropics (or any vacation for that matter) we try and see as many birds as possible.  The last time were here, the ponds were half dry, but this time they were quite full.  As a result, we saw many more birds this time than we did last time.  After our birding venture we drove up to a Tropical Plantation that we like to visit when we are here.  One of the reasons we decided to go this day (Monday) because my list of Farmer’s Markets said that they had one on Monday.  Wrong, when we got there the sign said Tuesday.  No loss though, because we did get to see more birds as there are plenty of ponds in this venue as well as beautiful tropical plantings.  They also had a store where we could purchase tropical food items.  One of the things which I bought was a bag of Pineapple/Coconut Caramel Corn – this was very yummy!

On the way back from the Tropical Plantation we stopped at an ‘Open-Air Market’ on Kihei Road and purchased some fresh Tropical Fruit which included Papaya, Maui Gold Pineapple, Apple Bananas, Baby Jicama and a lime which was almost pink in the middle.  Our next stop this morning was the Market again where we purchased ready-made sandwiches (one thing we noticed this visit is that all the Markets and ABC Stores and Whalers Stores have a very nice Deli Counter and you can get almost anything for any meal.  Competition I’m sure the restaurants don’t like)  In addition to the sandwiches we  purchased Cornflakes which managed to last us most of the 11 days that we were there.

For dinner we went to the Five Palms Restaurant which was just down the street from our Condo.  Not only was the food delicious but the view was fantastic.  In addition to the foregoing they also have a very good ‘Happy Hour’ that lasts from 3PM until 7PM.  We got there about 5 PM and since it was so busy and the patio was full we were seated inside and had great comfortable seating and a great view. 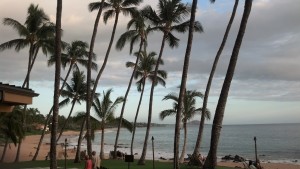 We ordered California Roll, Coconut Fried Shrimp and Chicken/Lettuce Wraps along with Beverages.  Not necessarily Hawaiian Food except for the Shrimp but nonetheless very good. 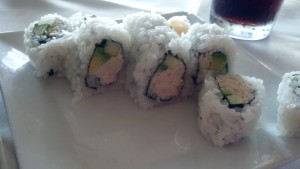 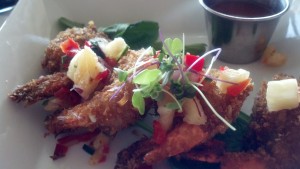 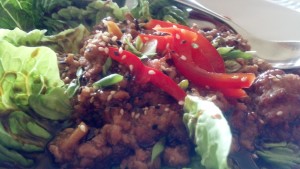 The next day for Breakfast we each had a half of a Papaya filled with cubed Pineapple and sliced Bananas sprinkled with a little Turbinado Sugar and sweet Lime Juice as well as Hawaiian Coffee. 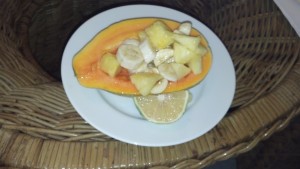 To make the Fruity Breakfast simply slice a ‘ripe’ Papaya in half lengthwise, scoop out the seeds (a delicious Salad Dressing  – popular in Hawaii can be made from the seeds), squeeze a little lime on the fruit and then fill with fruit of your choice such as sliced Bananas and Pineapples or whatever your preference is.

Check back for more on our Maui Food Adventures.