Last Night’s Dinner was Teriyaki Pork Tenderloin with sautéed Spinach with Mushrooms and Onions.  I had been busy most of the afternoon baking Gingerbread House Parts so my husband Ev, went to the store for me to pick up the Pork Tenderloin and a Vegetable.  I had asked him to get whatever Leafy Vegetable he preferred and it could be fresh or frozen.  He picked out frozen chopped Spinach.  Now, I love Spinach, but chopped is another story.  Anyways, I sautéed it with diced Onions and sliced Mushrooms.  It came out pretty good, but the whole leaf would have been better.  Anyways, I always cook too much for two people and there was a good size portion of the Spinach leftover.  When we discussed what we would like to have for Dinner tonight, Ev wanted Pasta.  I said okay but didn’t tell him what kind of Pasta we were going to have.  Here is where the Makeover comes in.  Listed below are the leftovers that  I incorporated into the meal along with the additional ingredients that I had to purchase: 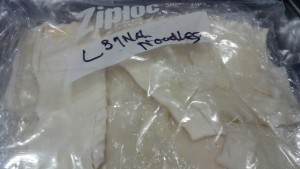 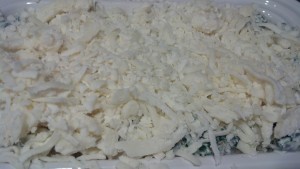 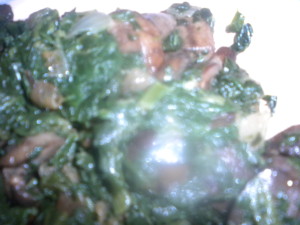 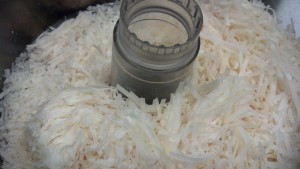 This was probably one of the easiest meals I have prepared in a long time.  Below is the order in which I prepared this dish:

I – Making the Tomato Sauce 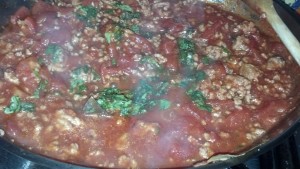 Add the Basil at the end of the cooking period. 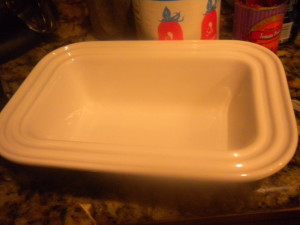 Oil the Bottom of the Baking Dish 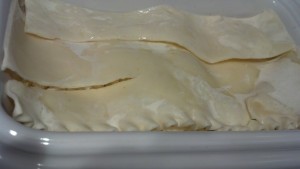 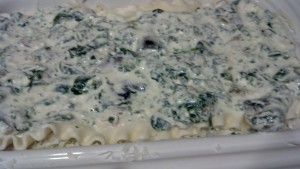 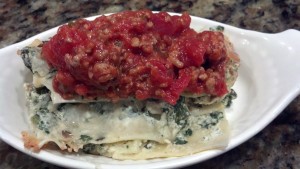 Today is David’s Birthday and since I invited him for dinner I also asked him to choose what he would like for dinner.  He had lost 30 lbs. since December and thought this would be a good day to indulge himself, just this once!  So Dinner was Lobster Lasagna, a Pineapple and Artisan Lettuce Salad with (the dressing is going to remain secret) and Sweet Potato Beignets for dessert. I added rustic Olive bread to the menu.

#1:    Peeled and cubed the Sweet Potato and cooked it along with 6 ounces of Butternut Squash in salted Water.  Once it came to a boil, I shut off the heat and let it sit, covered, on the stove until I needed to use it.

#2:    I had some last minute shopping to do, so went to the market and got back by 9:30 and immediately continued with the food prep which went as follows:

#3:    Using the Food Processor in a sequence designed to avoid  repetitive washing, Shredded the Parmesan Regiano, then sliced  the fresh Mozzarella with the thick slicing blade.  (Fresh Mozzarella does not shred well unless it is half frozen.  Processing it with the slicing blade, ends up with it being half sliced and half shredded which is perfect for Lasagna.

#4:    Made the Basil Pasta Dough and wrapped it and set aside to rest.

#5:    Made the Olive Bread Dough and placed in greased bowl with plastic wrap in a warm place to rise until doubled in bulk.

#6:    Made the Dough for the Beignets, covered it with plastic wrap and set in refrigerator for the dough to raise up.

#7:    Removed the two Lobster Tails from the shell (froze the shells for  later use to make seafood stock), cut up into bite-sized pieces and  then marinated with Garlic, Basil, Lemon Juice and Olive Oil.  Covered with plastic wrap and placed in refrigerator.  (Never  marinate seafood for more than 20-30 minutes max!)

#8.    Brought in my old Kitchen Aid and attached the Pasta Roller;  placed a large pot of salted water on the stove to boil and set out some clean dish cloths, one of them dampened.

#9:    David came over and we started rolling out the Pasta Dough, one fourth of the recipe at a time.

#10:  While David was running the Pasta Dough through the first 2 numbers on the Pasta Machine, I started sautéing the Lobster.  Once that was done, I placed the cooked Lobster meat in a  covered dish and proceeded to help David with the Pasta.

#11:  We decided that it was easier to roll all the Dough one number  at a time rather than having to keep changing the numbers.  Once  we got to #4, we cooked a small piece to test it.  It was not thin enough so we went to 5, repeated the test and then settled on #6   for pasta thin enough not to obscure the sauce, but thick enough to hold up under the sauce and through cutting and serving.

#12:  While David rolled, I cooked and placed the cooked pasta on clean dish towels.  Fresh Pasta is cooked when it floats to the surface of  the boiling water.  This took about 20 seconds, as opposed to the     10-12 minutes that dry pasta takes to cook.

#13:  We wanted the Lasagna to have enough layers to give each person a substantial slice and to be able to taste the lobster, so I decided to use just a 9 x 12 lasagna pan.

#14:  Once the Pasta was cooked, it was time to finish cooking the Sauce for the Lobster.  Using the same pan the Lobster was  cooked in and with the remnants of the cooking liquid, I heated the pan and added ¾ cup of Madeira Wine to the pan, and over high heat reduced the liquid to about one/fourth of its original  volume.  I then added 1 ½ pints of Heavy Cream and cooked it  over a medium-high heat until it reduced by approximately one- fourth.  I then added approximately one cup of Parmesan Cheese,        cooked it until the Cheese blended in and then added back the Lobster Meat.

#15:  We assembled the Lasagna with alternating layers of Pasta, Lobster Sauce and Mozzarella Cheese.  We alternated the direction of the Pasta strips so that the Lasagna would stay together when we cut and served it.

#16:  After the Lasagna was assembled, covered and refrigerated, David   did the accumulated dishes and ran the dish washed while I  punched down the Bread Dough and shaped it into loaves which I         then set aside to raise until doubled in bulk.  Since it was warm in   the kitchen, I knew it would not take long for the Bread to rise, so  while the bread was rising, I heated the Oven with the Baking  Stone in it.  The stone takes at least 30 minutes (preferably longer) to heat up at 500 degrees.

#17:  At this point, David had to leave to get some things done and I  decided to take a short rest.

#18:  Sprinkled Cornmeal on the Peel (wooden paddle for bread and  pizza) and placed the first loaf of bread on it and then slid it into the oven to bake.  When the first loaf was done, I then baked the      second loaf.

#19:  Around 3 PM I cooked the Shrimp for the appetizer and then washed the vegetables for the Salad and made the Salad Dressing.   This Salad and Dressing was so unusual, that I cannot divulge the          ingredients or the Dressing here because I am going to save it for  a future class or maybe a book or magazine article.

#21:  Cleaned 1 ½ lbs. Brown Mushrooms, quartered them and sautéed in Garlic, Olive Oil and Basil then set aside for a quick re-heat to serve at dinner.

#22:  Around 4:30 PM Ev set the table and I made the Dip for the cold  cooked Shrimp that was our snacking Appetizer and I removed the Lasagna from the refrigerator to warm up.  I finished the Salad Prep, leaving the Dressing to go on at the last minute.

#23:  People started arriving around 5 and we set out the Shrimp and  Beverages.  The Lasagna went into the oven. 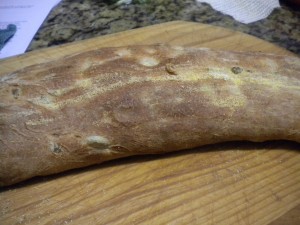 #24:  The Lasagna came out of the oven at 5:45 and the Asparagus went in.  Bread was then sliced.  We served the Salad and fresh Olive Bread and when that course was completed the Lasagna,  Asparagus and reheated Mushrooms were brought to the table   and everyone indulged in this extremely satisfying meal, even  though it was loaded with calories.  Because it was so rich, the   pieces were cut into moderate sizes, allowing those who wanted  more to have seconds and those who always ate less to have their   smaller portions.

#25:  When the main portion of the Dinner was finished, we cleared the  table, Tina did the dishes, Arthur wrapped the few leftovers there were and I heated the Oil to cook the Sweet Potato Beignets. 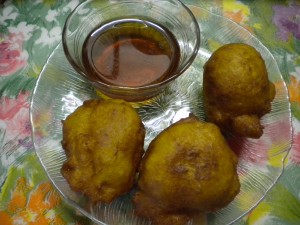 #26:  The Beignets were served with French Vanilla Ice Cream and a  Cinnamon/Anise Sauce to drizzle over the Beignets.  We all had a  good time and everyone thought the food was delicious.  Tina said         that she wanted a Birthday Dinner just like this one.  Hers last year was Mushroom Lasagna made with Crepes instead of Pasta.

We put a Birthday Candle in David’s Ice Cream and sang Happy  Birthday to him.  Everyone had a good time and David said he had a great day!  It was fun making dinner together.  It creates camaraderie and bonding and every family should try it!