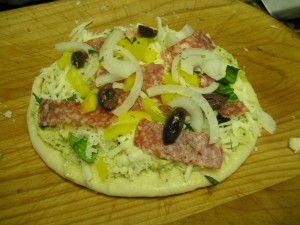 Pizza is one of the favorite foods of almost everyone I know and I am no exception.  I normally like to make my own pizza starting with the dough but there are times when a deviation comes in handy.  One of those times is when you have extra Pita
Bread sitting around and fresh tomatoes that will be tomato juice if you don’t
use them up soon.  This is when I came up with the idea of Pita Pizza.  Almost like ‘clean out the refrigerator’ vegetable soup, this is ‘use up the leftovers’ pizza dinner.

The ingredients that I had on hand and used were:

The ingredients that I had to purchase were:

To make the Pizzas I did the following:

To assemble the Pizzas, I placed the Pita on my Pizza Peel and then proceeded to dress
them.

I brushed a small amount of Olive Oil on three of the Pitas and then sprinkled on Parmesan Cheese.

I blotted the excess moisture from the tomatoes with a paper towel and then spread the sliced tomatoes on three of the pitas.
Minced Basil and Oregano went on top of the tomatoes along with a little salt and pepper.

Next came the Mozzarella Cheese, and on top of that went the Salami, sliced Black Olives, diced Bell Pepper and sliced Onion and of course, some of the Shitakes.

On the fourth Pita, I spread the Hummus and Mozzarella Cheese.

On top of the Mozzarella, came Salami, Shitakes, Bell Pepper and Kalamata Olives.  This one didn’t need any salt and pepper as
the Hummus was well seasoned.

Just before we were ready to eat, I slid the Pita Pizzas onto the heated stone and baked them for 10 minutes or until the pitas were slightly browned.

If baking the Pita Pizzas on a pan, preheat the oven to 425 degrees and bake for about 10 minutes or until of the desired doneness. Once the Mozzarella is melted and just beginning to bubble, the pizzas should be done.

Serve with a green salad and voila, dinner is complete! 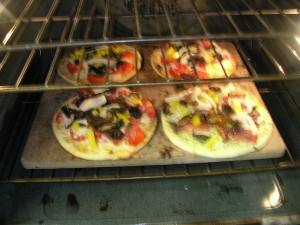