On Tuesday we roused ourselves out of bed around 5:30 AM so that we could drive to Hanapepe to look for the Rose-ringed Parakeets.  The flock of Parakeets that exist here are the progeny of pet birds that were released many years ago.  While they are very pretty to look at, they do present themselves as pests to the agricultural world.  However, since we are birders we love to seek out the colorful tropical birds.  The best time to find these birds is early in the morning when they leave their roost for their feeding grounds or at dusk when they return to their roost.

We left the condo at around 6 AM and brought breakfast with us.  Breakfast consisted of Banana Bread, Apple Bananas and cold drinks. The Apple Banana is a small banana no longer than 4 inches.  The flesh of this banana is somewhat firm even when ripe and as they are named, they do taste somewhat like apples.  They seem to be the banana of choice among the Kauai growers.  Ours were purchased at the Koloa Farmers Market on Monday, but all the markets carry them as well.

As you drive to Hanapepe from Poipu there is a scenic overview close to Hanapepe.  This is where we stopped to try and get a look at the parakeets.  After about 30 minutes of patient watching, we did manage to catch a glimpse of several of these birds that flew by.  Along with the parakeets, there were many numbers of Cattle Egret, another introduced bird.

The Cattle Egret is similar in size to the mainland Snowy Egret, but has a gold bill and gold feathers on the back of its neck.  The Cattle Egret also flourishes in the state of Florida, another rather tropical area.  These birds are called Cattle Egret because they often are seen around cattle where flies tend to congregate.  The birds feed on the insects and flies that are attracted by the cattle.  After our viewing at the scenic overview, we then drove into Hanapepe to look for more birds in the river and the rice fields.

Also in Hanapepe is a swinging bridge (which doesn’t really swing too much) that crosses the river.  We both went across the bridge and did get a good view of the river and its banks.  Of course, we did jiggle the bridge a little to get the swinging effect. After this little jaunt we then visited the Hanapepe Café which is on Hanapepe Road, the main street in this town.  The Hanapepe Café is owned by a friend of mine who took classes at the Westlake Culinary Institute where I teach children’s, teens and parent/child classes.  Since it was really too early for lunch and we did have a breakfast of sorts we just decided to order the Mango Pie and Coffee.  The pie was packed solid with sliced mango and the crust was really tasty and flaky.  The coffee was excellent as well.

On the way back to our condo we stopped at the Living Foods Market in Kukui`ula Village near Poipu.  While there we picked up some Eggs and Bacon for breakfast the next day and a Turkey Hoagie from their café.  The sandwiches are made to order and there is a whole selection of items to put on them along with a large variety of meats from which to choose. There is also a variety of bread product to choose from.  We ordered ours on a Hoagie Roll along with Lettuce, Tomato, Red Onion and Dijon mustard and mayonnaise.  We brought the sandwich back to the condo as it was still too early to eat lunch.  It was an excellent sandwich and we enjoyed it along with Maui Style Potato Chips.

One thing about traveling around on Kauai is that Kauai is a small island and even when you are going from one town to another, it really doesn’t take very long to get anyplace, so that is why when we got back to Poipu it was still too early for lunch even though we had covered a lot of territory that morning.  After lunch we went to the beach and enjoyed some sun, sand and surf.

For dinner that night, we walked over to Kalapaki Joe’s which is advertised as a premier sports bar annexed to where we were staying.  With a window seat you look out over the tennis courts and if you keep your viewing inside the restaurant, there are many TV Screens with sports events on them.  We went during Happy Hour which extends from 3 – 6 PM.  We each had two fish tacos at $3 apiece.  Ev had a light beer and I had a Margarita which was a $5 special.  The fish tacos were very good and were served with shaved cabbage on a cheese crusted tortilla and tomatillo cream sauce. The Happy Hour Tacos were a real bargain since two fish tacos during the dinner hour cost $9.99.

Dessert was brownie bites back at the condo where we sat out on the balcony and enjoyed the sunset and the evening breeze.  Be sure and check back in tomorrow for our next Culinary Experience. 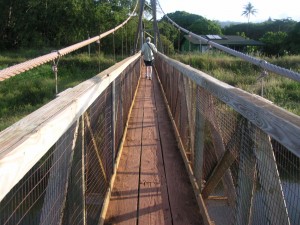 Ev Walking Across the Swinging Bridge