The City of Fillmore, CA is known as the ‘Last, Best Small Town’.  Small it is, as it only incorporates an area of 3.4 square miles.  But small as it is, it is still an incorporated city since 1914.  The city gets its name from J. A. Fillmore who was a general superintendent for the Southern Pacific Railroad which came to the Santa Clara River Valley in 1887.

Fillmore is located 39 minutes north of Thousand Oaks traveling on the 23 North.  The 23 North ends at Moorpark,  so you have to exit the Freeway and travel down Los Angeles Avenue to get to the roads taking you to the 23 North. (It is well signed, so you can’t miss it)  (Google also gives you correct directions)  It is a mountainous route with lots of turns (and this time lots of road work being done)  One of the nice things about this drive is that you get to view the Orchards and farms that you thought had disappeared from the area.  (Fortunately, only the obvious ones facing the Freeway have been the culprit of more and more condos and homes.)  So the Santa Clara River Valley of which Fillmore is a part, still is well endowed with agriculture, fortunately.

As you enter the city limits the sign proclaims that the population is 14,000 and the elevation is 469 ft. The sign looked a little worn, so I am making an educated guess that the population is larger than 14,000.  (According to the 2012 Census, the Popoulation was 15,002.  The reason for this is that there are a lot of new home developments and people from outlying areas are probably taking advantage of this (home prices have got to be lower than the Conejo Valley or other nearby areas – it takes a little drive to get to Fillmore but it is a nice place to live and raise a family.  The School District consists of two High Schools, one Middle School and four elementary schools.

Returning home, I decided to take the 126 to Ventura to avoid the road work and the twists and turns.  It was quite a few miles longer but didn’t take any longer as you could go faster than 35 miles per hour and there were no twists and turns.

So much for particulars – Fillmore used to be a quaint little town that was fun to visit.  On my recent visit  there it looked entirely different than I remembered it from past visits.  Fast Food and Big Block stores have invaded there as they have in almost every sector of this country.  ‘Not so Good’.  But if you go to the back streets and the area where the City Hall is located you will find remnants of the past.  I went up one such street and found the water Tower with the name of the city well visible.  I also found the rail tracks and loading docks for the freight trains that bring merchandise to the town and/or take it from the town. 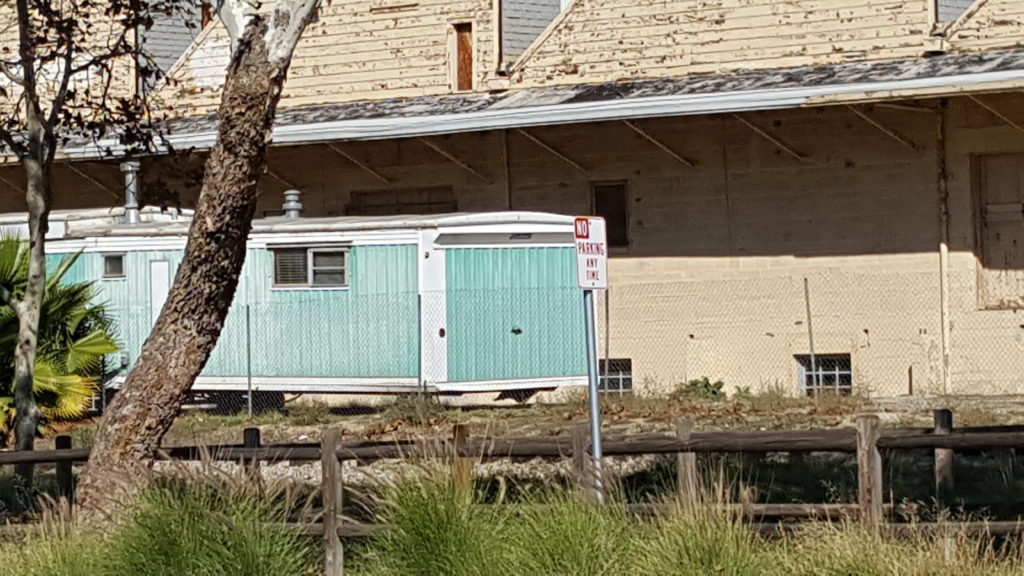 The Train System is a big part of Fillmore – in addition to the freight trains bringing merchandise in and out of the town, there are also tourist trains which run to the orchards.  There are event trains such as the ‘Mystery Dinner Train’ which I have been on.  There are also other events such as the ‘Pumpkinliner’,  ‘Christmas Tree Train’, ‘North Pole Train’, etc. The train system is Fillmore is also the scene for many movies and tv shows.

This last time that I was there it was lunchtime and I decided to try what looked like and was an authentic Mexican Restaurant, called El Taco Llama.  The menu had a lot of variety – there were many, many items you could choose from and everything was made to order.  My lunch was the two taco plate which came with rice and beans and salad and Guacamole.  There were plenty of salsas on the side from the salsa buffet, both mild and spicy.  Even though the tacos were the small authentic style, I could not finish the whole plate as the sides were plentiful. 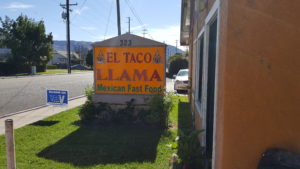 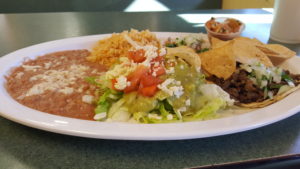 For something to do and someplace to go that is different try taking a trip out here – park your car and walk around but stay away from the chain stores.  These are not Fillmore, but everywhere USA.