Thursday was Day Five and it was another early rising day.  Again we had breakfast on the go and that consisted of hard-cooked eggs, banana bread and apple bananas.  We drove to Koke’e, a natural area located in the upland area of northwestern Kauai, along with Waimea Canyon and Nä Pali Coast State Parks.  Our purpose was to view the native birds that inhabit this area.  This time we did the easy trails and did get to see quite a few different birds.  When we were here in 1996, we actually did the trail in the Alaka’i Swamp.  By the time we finished our clothes were covered in Kauai’s red dirt mud and actually had to hose off in the park before we got into our car.  It was quite an experience though and am glad we got to do it.

The birds that we say this time were:  Hawaiian Amakihi, which is a greenish bird with a long curved beak, the Kauai Elepaio, which is a small bird with a long tail.  Its head is a reddish brown and it has a small beak designed for foraging for insects.  We also saw the Akeke’e, which is a greenish-yellow bird with a black mask around the eye (especially prominent in the male) and a bluish bill.    We saw an Anianianu; a honey-creeper with distinct yellow coloring.  This bird unfortunately has been prey to malaria brought in by mosquitoes and its numbers are dwindling.  The birds can now only be seen in the higher elevations where there are fewer instances of mosquitoes.  The last native bird we saw this day was the Hawaiian Iiwi, whose bright red feathers, pink curved bill, and black wings and tail distinguish it from the rest of Hawaii’s forest birds. 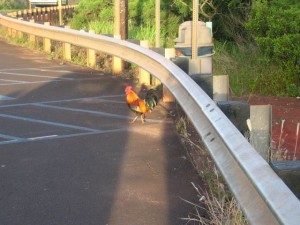 This has been enough about birds now, when I’m really supposed to be talking about food.  But the birds did lead us to our lunch today and that was at the Shrimp Station in Waimea.  We did get there a little early and had to wait for them to open up.  The Shrimp Station is more of a stand than a restaurant and all seating is outdoors.  Since their  kitchen is open to view, we just sat and watched them set up for the day.  This is mainly a lunch and early dinner place as the hours are from 11 AM – 5 PM daily.  Ev had a craving for Coconut Fried Shrimp and that is what he had along with fries.  My cravings went towards the sweet chili garlic shrimp and that was served with white rice of potatoes.  The portion of the sweet chili garlic shrimp was more than ample and even though it was sweet chili there was still a kick to it that the rice helped to buffer.  A salad would have been good with this dish as well as some bread.  Fortunately we did have cold drinks. 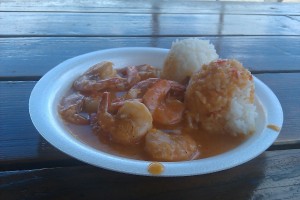 Again, the afternoon was spent on the beach and just relaxing and enjoying the tropical weather.  For dinner, I made hamburgers which I ended up calling Tropic Burgers and will probably feature in one of my classes. I had purchased the ingredients the day before and that included ground sirloin, buns, and we had lettuce and tomatoes from the farmers market along with cheese from Big Save.  The items I did forget to purchase were mustard, mayo and ketchup so I became innovative and used our Papaya Seed Dressing as our only condiment.  They turned out very good.

Here is how I made the burgers; sautéed sliced red onions in butter until they were soft and just starting to caramelize.  Toasted the buns in the toaster and then cooked the burgers with salt and pepper and some garlic powder.  Put cheese on them after they were turned and started to cook on the second side.  The dressing went on the buns and the burger on one side and the onions on top of the meat, and then the tomato and lettuce.  This really turned out to be an excellent burger.  Along with the burgers we opened the bottle of wine that came with the condo.  All in all, it was a very good dinner. 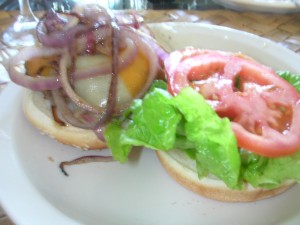 After dinner, we drove around the corner to the beach and checked out Brennecke’s Beach Broiler for a future meal.  The downstairs portion of Brennecke’s makes fresh sandwiches for breakfast and lunch and even dinner, if you are so inclined,  and they also sell chips, sodas and other various sundry items.  Later on we went back to the condo and sat on the balcony and enjoyed the sunset.