Ciabatta is a rustic bread with a crispy crust, and a chewy texture inside with large shiny holes.  Even though it is a rustic bread it has become popular as a gourmet item.  Ciabatta originated in Italy but can be found in specialty stores and restaurants throughout the United States.

Sunday Night we had Beef Fajitas for dinner.  Since I have a hard time making enough just for two, as usual there were leftovers.  Rather than eating them with Tortillas  for a second time, we decided that we would use the leftover vegetables and meat for BBQ Beef Sandwiches on Tuesday Night.  I love making this type of sandwich on Ciabatta Bread and usually purchase it at Trader Joe’s.  This time I decided that I would make it myself;  one I love to bake and making Ciabatta is a lot of fun, even though it can be time consuming.  The second reason is that you can make your own bread, have it fresh out of the oven (or almost) and save money.  Home-baked breads cost about one-fourth of the purchase price of bakery breads.  However, the dollar savings is not the most important reason for making them.  I just love to bake!

Since the cleaning people were going to be here Tuesday afternoon, I needed to make the bread and have it completely baked by late morning or Noon at the latest.  So, I followed my plan of making the dough this afternoon, stretching it, proofing it and having it ready to portion and bake Tuesday Morning.  Ciabatta normally takes at least two days to make because you have to make a ‘Poolish’ which is the starter for the Dough.  The Poolish only uses 1/8th teaspoon of Yeast in 2 1/3 cups of Flour & 1 ¼ cups of Water and it is supposed to proof at room temperature.  The following is what I did to hasten the project:

Used ½ tsp. Yeast in Warm Water (instead of cool water), covered it and put it outside on the patio table in the sun.  Instead of taking 10-12 hours to double in volume, it took only two. 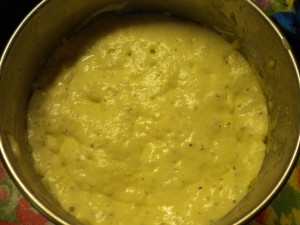 The Poolish after doubling in Volume 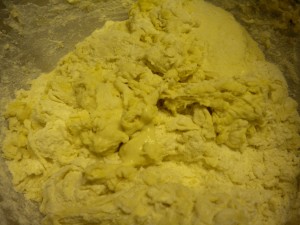 Before dinner, I made the Dough and allowed it to rest.  The recipe says to knead the Dough for 7-8 minutes but this is a sticky dough and kneading it by hand would have been a mess.  I opted to use my Kitchen Aid with the Dough Hook to knead it and this worked very well.

After dinner, I then stretched the Dough to develop the gluten as the recipe describes repeating the process four times.  For a really abbreviated version, you can perform the stretching process only once, however, you will not have the same texture as the Rolls done with the complete stretching process.  The Stretching Process involves folding the Dough and Stretching it as you fold.

The Dough Before Stretching 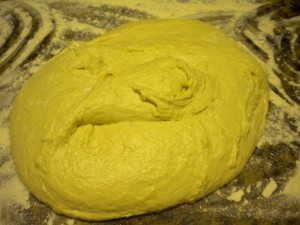 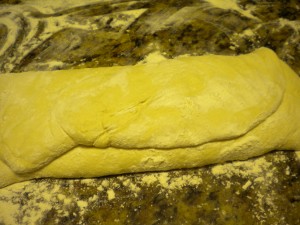 Two Folds - From Bottom to Middle and From Top to Middle

After the final stretching process you are supposed to let the dough rest for 50 minutes and then shape it into bread or rolls.  Since I didn’t want to bake it until the next morning, after the 50 minute resting period (which is also a proofing period), I dusted the Dough lightly  with Flour, bagged it in a plastic bag and refrigerated it overnight.

Tuesday Morning, I removed the bag of Dough from the refrigerator and let it warm up for about one hour.  I then shaped it and cut it into rolls for dinner. 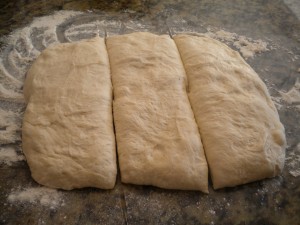 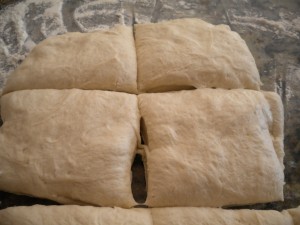 After a 45 minutes resting and raising period, I dusted the rolls with the remaining cornmeal/flour mixture , (used a little too much, but it is easy to brush off) turned on the oven and placed a pan of water on the bottom rack.  The steam from the water helps to make the rolls crusty on the outside.

Once the oven had heated up to 450 degrees I then placed the rolls on the middle rack, misted them lightly with water from a spray bottle and closed the oven.

After 20 minutes, I checked the rolls and decided they needed another 5 minutes.  The finished roll should be a golden brown and sound hollow when tapped on the bottom. 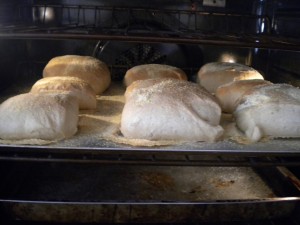 Just before removal from oven

After the baking period the rolls were removed from the oven, placed on a rack to cool and then placed in an airtight plastic bag to await dinner.

Just before dinner time, I heated the leftover Fajitas and added Avocado Halves to the leftover salad from last night.  In the indentation left from the Avocado Pit, I added some Basil Oil which would also serve as the Salad Dressing.  The BBQ Sauce was put on the table and we added it individually to our Sandwiches.  The Ciabatta Rolls made a very nice and tasty holder and also served as our starch item for dinner. 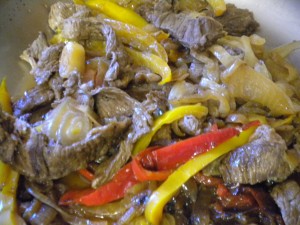 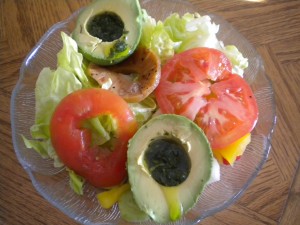 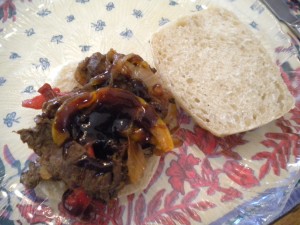