My significant achievement this week was to make Croissants.  On Tuesday, I went to a friend’s for lunch and asked what I could bring.  She said that anything that went with a Shrimp Salad would be good, so I thought bread or rolls would be ideal.  With that in mind, I decided to make Croissants. I hadn’t made them in a long time and this would be a good excuse.  Croissants are not hard to make – they are just time consuming.  Luncheon was going to be on Tuesday, so I figured that I would need to be able to bake the Croissants by Monday evening as the proofing time for them would be several hours and if I waited until the morning, I might not have enough time as I had an 11:30 appointment before going to lunch at Mary’s.

We were scheduled to go to a BBQ lunch at Jenny & John’s (Ev’s Grandaughter & Grandson In-Law) Sunday afternoon so  I set to work to make the Croissant Dough in the morning.  The Dough is a yeast dough and uses 2 cups Bread Flour and 1 cup of All-Purpose Flour.  Unlike a normal yeast dough, the yeast is dissolved in a cup of cold milk.  (Normally you don’t want to use cold milk without first scalding it, because the enzymes in milk prevent the yeast from working to it’s full capacity)

Next you combine the Flours, Sugar and Salt and then work in ¼ lb. of Butter.  This can be done with your fingers, a pastry blender or a food processor.  In any case the butter should be cut up into several small pieces (8 works best) to facilitate working it in.  I preferred to do it with my food processor as it cuts it in very evenly and distributes the butter throughout the flour.

Next, the Flour mixture is added to the Yeast/Milk Mixture.  The two mixtures are then stirred to combine and then kneaded until you have a smooth dough.  It takes about 7-8 minutes in a Standing Mixer fitted with the Dough Hook and about 10-12 minutes if you are kneading by hand.  After the Dough is kneaded, it is shaped into a ball, scored on time with an X cut going across the whole top of the ball and then wrapped tightly in plastic wrap and refrigerated for at least 5 hours.

By the way, Croissant Dough as Danish Dough, is a Laminated Dough and is a pleasure to work with.  This Dough comes out really well and feels really nice to the touch.  It is not sticky or dry!

Once the chilling time is over and you are ready to roll in the Butter Block, make the Block.  The Butter Block consists of ¾ lb. of Butter and it is easiest to make if you use Butter that comes in 4 pieces per pound.  Cut each of the 3 Sticks in half down the middle to make 6 pieces no thicker than 1inch.  Place the 6 pieces of butter on a piece of parchment paper that has been dusted with Flour and then dust the top of the butter with flour and cover with another piece of parchment.  Take your rolling pin and tap the butter over the parchment to soften it.  Once it has softened sufficiently (not melted!) shape it into a 6 inch square.

The next step is to roll out the dough and encase the butter in it.  Once that has been accomplished, and you have turned it, you then wrap it and refrigerate it for 30 minutes and roll and turn again.  This step must be repeated a total of 3 times.  After the 3rd time the dough should be refrigerated for several hours but not more than 24. 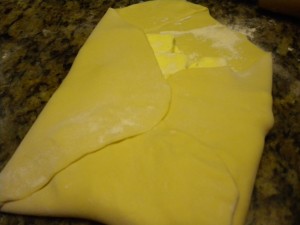 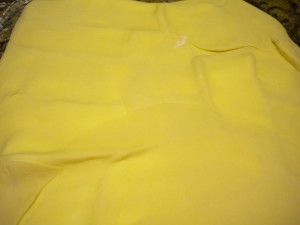 Butter Block Sealed into the Dough

When you are ready to roll out the dough you roll it into a 12 x 18 rectangle and cut the rectangle in half horizontally.  You then mark it every 5 inches on top and bottom with a sharp knife. 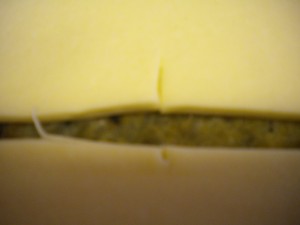 Marking the Dough with Knife Slits

You then cut diagonal lines from left to right, using the marks as a guide.  Next you cut more horizontal lines from right to left.  This leaves with triangular pieces of dough which then cut rolled up from the point to the wide end to form a Crescent Shape.  This recipe was supposed to make 14 large Croissants and 4 Minis but somehow I got about 18 large Croissants and several minis.  I made the large Croissants just normal Croissants without filling.  I used Almond Paste and Strawberry Jam (homemade) to fill the smaller and odd-shaped Croissants.

The rolled Croissants filled up two parchment covered baking sheets which I then covered with Plastic Wrap which was lightly sprayed with a Vegetable Oil Spray.  I placed them in my oven (not turned on) to proof.  The dough was still cold so they took about 3 hours to proof.  Unlike most yeast doughs, do not wait for the Croissants to double in bulk, because this will not happen.  (Remember the cold milk affects the action of the Yeast)  When they are completely proofed, the Croissants will feel light but will not have doubled in bulk. 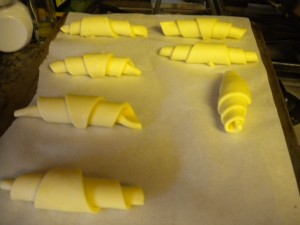 Next you brush them with an Egg Wash (1 whole Egg + 1 Yolk).  The additional Yolk helps the Croissants to brown well.  Preheat your oven and place one pan on the middle shelf and bake for 12 minutes.  After twelve minutes the pan was rotated back to front and the heat reduced, then the Croissants were baked for approximately another 20 minutes or until they were nicely browned.  Repeated the process with the second pan. 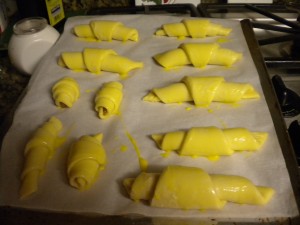 In the end we had a nice batch of Croissants, six of which I packed and brought to Mary’s house for lunch on Tuesday.  Another 6 or so were packed and frozen for later use.  We still had ample Croissants to eat at home and we did have them for breakfast at least 2 days in a row and there were still some leftover to snack on. 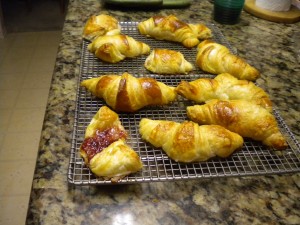 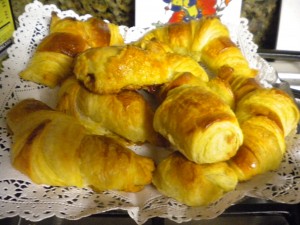 Croissants are fun to make and it is really exciting to see how the laminated dough puffs up when baking.  Don’t forget, Croissants as other puff pastries, need a HOT oven for the puffing action to take place!  For the full recipe just type in Croissant Recipe in your browser and many will come up.