Even though mushrooms are usually eaten as a vegetable, they are neither a vegetable or a fruit.  They do not grow from seeds as do vegetables but are propagated through spores.  There are literally thousands of different types of mushrooms throughout the world with over 10,000 found in the United States alone.  In the state of California there are over five hundred noted varieties that grow wild.

Mushrooms or fungi are one of those foods that people either love or hate.  Mushrooms are a versatile food and can be used in many different ways.  They are so rich in protein that they can be substituted for meat with the same satisfaction that a meat-lover would get from a good piece of beef. 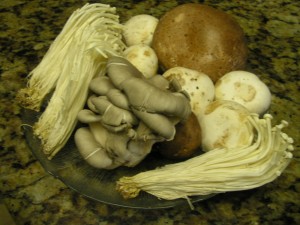 Even though mushrooms present a variety of flavors, one of their distinct features is their texture.  Some are soft, others provide more chewiness while others can be crisp.  The mushrooms most used are the Crimini (brown mushrooms) and the white mushroom.   Usually, the more color a mushroom has, the more flavor it will have.  To that end, once a mushroom has gotten to the point where the cap has opened and ‘spread its wings’ and you can see the gills, this is when the mushroom is at its most flavorful.   You just want to be careful and not go too far beyond that point, because they will start decomposing shortly after that point.

You may see what you think are mushrooms growing in your lawn after a rain, but these are usually toadstools and not safe to eat.  Only trained mycologists (those trained in the study of mushrooms) should attempt to pick the wild variety.  For consumption, it is best to purchase your mushrooms from the market, a qualified mushroom grower or your local produce retailer.  The most common types of mushrooms available in supermarkets today are:

The White Mushroom, Crimini or Brown Mushroom, Portobello which is a full-grown Crimini, Shitake and Enoki. Also available are Oyster Mushrooms, which grow in clumbs and resemble the shape of an oyster.  Their taste is reminiscent of oysters.  Dried Mushrooms come in more variety but need to be reconstituted before using.  Mushrooms can be used for entrees, side dishes in place of or with another vegetable, as a flavoring component in a multi-ingredient dish such as stir-fry.  Mushrooms can also be used in omelets, quiches and crepes.  One popular way to serve mushrooms is to stuff them and serve them as appetizers, or in the case of the Portobello as an entrée.  Whichever way you prepare them, mushrooms can add a world of flavor and texture to your meals.

If you would like to try your hand at growing your own edible mushrooms there are numerous [amazon mushroom growing kits available for purchase.  Growing your own would be exciting and fun and you would always have them on hand when you need them.

Mushrooms are one of those food items that should not be washed.  Instead of washing, wipe them with a damp paper towel or use a mushroom brush which is made specifically for cleaning mushrooms.  The brush is soft and will not damage the flesh of the mushroom, but will just brush away the dirt and debris.

In the photograph above, the mushrooms in front from left to right are the Enoki, Oyster, Enoki.  In the back row, the large one is the Portobello, the smaller brown are Crimini and the others are the White Mushrooms.

For  recipes using these mushrooms,  please check the recipe section of this site.  You will find a Mushroom Appetizer, a Burger, a Soup and a Pasta dish.  Try them out and enjoy the results.  Tasty dishes shoud be your reward.