January Holidays – Celebrated with Food: Chinese New Year – ‘The Year of the Dragon’ 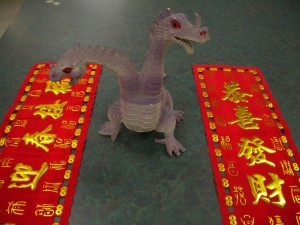 Year of The Dragon

This is a wonderful holiday to enrich your children’s lives with by exposing them to some of the events that may be taking place in your area and by making the preparation of some Chinese Food a Family Event.  Chinese New Year is one of those Holidays where food is important and there are many things that are symbolically served during this celebration.

The Chinese New Year is celebrated with parades, dancing and food.  Families get together and enjoy the time with each other.  If you live near a China Town, visit it when the New Year parade is scheduled.  There will be colorful clothing and floats which will most likely include a Dragon Float.  One of the colors that is used during these celebrations is red, so that you will see many of the participants clothed in red.

Eggs for good reason are a symbol of fertility in most cultures around the world and therefore the Tea Eggs represent fertility and life.

Cracked Hard-cooked Eggs are soaked in a Tea Leave/Soy Sauce Mixture until they absorb the pigment from both. These Eggs will pick up the flavor of the Anise and the Cinnamon, making for an interesting dish.  They make really good Egg Salad Sandwiches.

Yu Sheng, the Chinese Fish Salad is important because the raw ingredients symbolize the renewal of life and what is the New Year all about if not that? Yu Sheng is often made with fresh melon, sesame seeds and raw fish which is dressed with Lime Juice, Olive Oil and White Pepper.

The whole Chicken represents the bond of family and is usually prepared by simmering with vegetables.  Chicken in a pot would be representative of this dish.

Bean Cakes are favored for their sweetness which symbolizes a rich, sweet life. while the round shape signifies family reunion.

In addition, Noise Poppers and other related items are employed during the celebrations.

You can make up your recipe for the Fish Salad and if raw fish doesn’t sit well with you, you can always substitute smoked or canned fish.  Shredded Napa Cabbage would be a good balance for the sweetness of the fruit in the dish.

To make a whole chicken, pull out a pot large enough to hold the Chicken along with Vegetables, Cilantro (coriander or Chinese Parsley) a Bay Leaf or two and other herbs of your choice and enough water to cover all the ingredients.  Bring to a boil, reduce the heat and then simmer until the Chicken is tender.  (At least 1 ½ hours or longer)  Taste for seasoning and add Salt and Pepper or Soy Sauce, if desired.  Cut the Chicken up into serving portions and serve in individual bowls along with the Vegetables and Rice on the side.

Bean Cakes can be purchased at an Asian Market or Bakery.

For additional recipes please see the Appetizer Section under recipes on this blog.