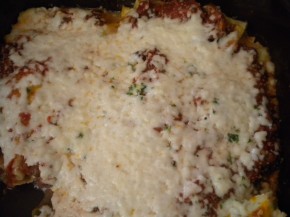 Since my car is in the shop today, thought it would be a good day to get some cooking and baking done. (For a Change!) Removed one quart container of Chicken Broth from the freezer and cut up the center portion of a head of celery and put it into the broth to simmer. While the simmering was taking place, cleaned and sliced about half pound of mushrooms and sautéed 1/3 of them along with some leftover minced Onion in my Soup Pot that I would end up using for the Celery Soup. 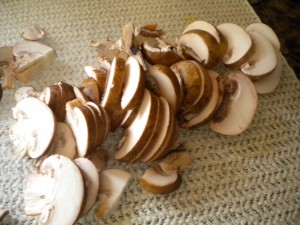 While this was happening, decided to cook the Pasta Sauce that I was going to use for Cannelloni that I was planning on for our Dinner tomorrow night. Also defrosted the leftover Basil Pasta Dough that I had in the freezer.

Minced some fresh Oregano and Basil along with Garlic. Sautéed the minced Garlic along with some diced Onion in the Pasta Sauce Pan. While it was sautéing, add a sprinkle of Sea Salt to hasten the cooking and for flavor. When the Vegetables were sufficiently cooked and the Mushrooms were slightly caramelized, added some Marsala and reduced that. Once the Marsala was reduced, added a can of crushed Tomatoes along with some Black Pepper. Allowed to simmer for about an hour before adding the fresh Herbs. 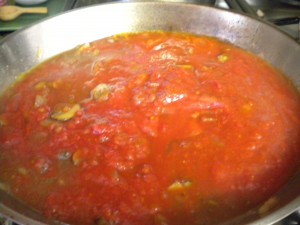 Once the Celery had cooked sufficiently and the Chicken Broth had reduced, I used my Emulsion Blender to puree the Celery/Chicken Broth mixture and then poured it through a strainer to remove any remaining strings or pieces of celery. Added the strained Broth to the pot with the sautéed Mushrooms and Onion and then allowed it to cool down. Decided that this was going to be for dinner tomorrow night and that the Pasta would be for night. A method to my madness here. The past dish was enough for two meals and I figured that if we had it tonight it could then be used again on Thursday night for dinner.

While the Sauce and Soup were cooking, I prepared the Ricotta Cheese filling for the Cannelloni. Into a pint of Ricotta Cheese, I added two Eggs, 1/2 cup of freshly shredded Parmesan, some Salt and White Pepper to taste and some freshly minced Basil. 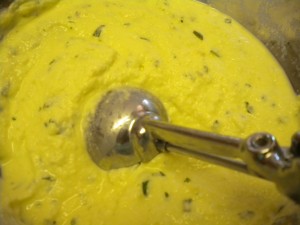 I laid out the Pasta Dough (it was already cooked) on my largest cutting board working with the pasta strips in a lengthwise fashion, I scooped a portion of cheese onto the short end, about 1″ from the edge. Folded the Pasta over the Cheese twice, cut off the remaining Pasta and placed the Cannelloni in a 9 x 12 Baking Dish. Repeated the procedure until the dish was full. I managed to make 10 Cannelloni from the Cheese Mixture and still had a small portion of pasta leftover that I can use another time. (Froze it again) 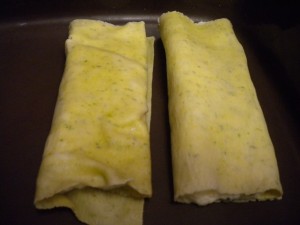 Placed a light layer of Sauce over the Cannelloni, covered it and refrigerated it until about an hour before dinner when I will remove it from the fridge to warm up. I transferred the cooled Celery Soup to the Quart container that the Broth was originally in and refrigerated that for the final cooking tomorrow’s dinner.

In addition to the above, I made a Baby Mozzarella Cheese Salad for dinner. Drained the liquid from the Mozzarella balls, cut them in half and then tossed them with freshly minced Basil and Oregano and Garlic along with some aged Balsamic Vinegar, Black Pepper, Sea Salt and Olive Oil. Returned them to the carton and refrigerated. At dinner time, will transfer to a serving dish and surround it with sliced Tomatoes. A very tasty first course that will go well with the Cannelloni. 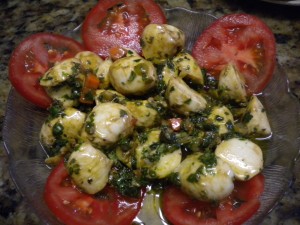 Since Ev is out of Chocolate Chip Cookies, I also made his weekly ‘Chocolate Fix’. This week it is Brownies which I made with Cocoa Powder instead of Baking Chocolate. Just replaced 1/4 cup of the Flour with the Cocoa. In addition, tried something new by adding about 1/4 tsp. Cinnamon to the Batter. We’ll see how that comes out. 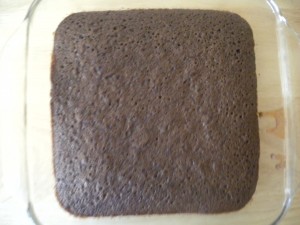 It is not 5:06 and the dishwasher has been emptied and all the pots and pans and bowls that I used today have been washed and put away The Cannelloni is sitting out to warm up and will go into a cold oven in 9 minutes. The reason it goes into a cold oven is that the pan I am using is not metal and therefore would be liable to break if put into a hot oven. This way by the time the oven warms up, the pan will have warmed up too. 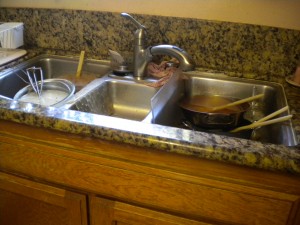 Pots, Pans and Bowls waiting to be Washed 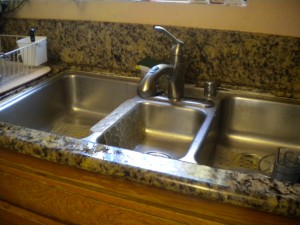 15 minutes later - Pots, Pans and Bowls Washed and put away

While the Cannelloni are cooking I will plate the Salad and slice the Tomatoes that goes with it.

This is all the Cooking that I am going to do for this week as I have other events planned. Quite enough though, for one week! Albeit, it has all taken place in two days. One great thing about making dinner early or days in advance, is that I do not always feel like making dinner at dinner time and it is nice to be able to take the dinner out of the refrigerator and just heat it up!