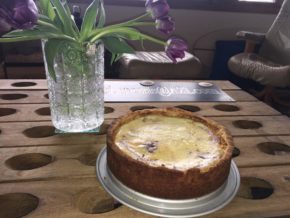 A Very Berry Torte was the selection for Week Three of our Sunday Baking Project.  The recipe was selected from the book – Baking from My Home to Yours by Dorie Greenspan.

The Torte consisted of a Cookie Crust which differs from the traditional Graham Cracker Crust in that you actually make it from a Sugar Cookie Dough.  Jam goes on the bottom and the Cheese Cake Filling goes over the top.  It is made in a Spring Form pan which allows you to remove the cake without destroying it – this is especially good when the crust is quite fragile due to the ingredients it is made with.  A Spring Form Pan has sides that lock on to the bottom and by use of a spring lock can be removed once the baked product is finished.  If you don’t have a Springform Pan you can purchase one at your local Culinary Store or on line at Amazon.com.

The Filling was also a little different than the traditional Cheesecake in that in addition to Cream Cheese it also had Cottage Cheese in the Filling.  The Cottage Cheese helped to give the filling a little more texture than normal which turned out quite well.

The preparation of the Torte begins with the Crust which is pretty similar to a traditional Sugar Cookie Dough and it certainly behaves like one in that it is not super easy to work with.  To roll the Dough out with as little trouble as possible it is best to refrigerate it first.  I did this by flattening the dough into a circle between two pieces of waxed paper.  When you do roll it out it is best to roll it between the sheets of waxed paper so it doesn’t break up.  You can also press the dough into the Springform pan although I don’t think you can get as even a crust as you would like with this method.

After the Dough is rolled out it is then refrigerated for 30 minutes before baking.  To bake the Crust it is best to use a ‘Blind Filling’- a sheet of buttered Aluminum Foil placed on the Dough with Pie Weights.  The Weights can be purchased or you can use dried beans.  The beans can be stored in an airtight container and used again many times as of course the weights can.  The Weights come in various forms – some are metal, others are ceramic.  They all work in pretty much the same way and whatever you buy would be up to you. 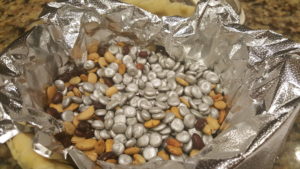 Pie Weights on Foil in Crust

The recipe said to bake the crust for 30 minutes before removing the weights, but I found that to be a little too long.  Try it yourself with different times – every oven is a little different so what I tell you may not work in your oven.  I would start out with the suggested time and then adjust it from there if you plan to make the torte again.

After the foil and Weights are removed the crust is returned to the oven for about 5 more minutes to brown the surface.  I personally thought the crust was over-done and would definitely try it with less time or maybe not pre-bake at all.  If I do bake the Torte without prebaking the Crust I will come back here and post the results.

The Jam is spread over the baked crust – to my taste, 1/3 cup of Jam was not enough to cover the bottom of the crust – next time I would use at least half cup or maybe even more.  It is supposed a Berry Tart and you do want to be able to taste it. 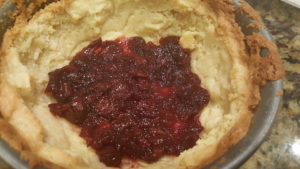 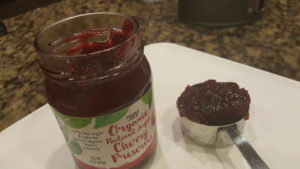 To make the Filling the the Cottage Cheese and Cream Cheese are first blended together.  Then the Sugar, Salt and Spices are blended and then the Eggs are beaten in.  This can all be done in the Food Processor or by hand in a large bowl with a whisk.  I think the Food Processor (if you have one) is the preferred method.  Much faster and the ingredients will be beaten more thoroughly than if you do it by hand. 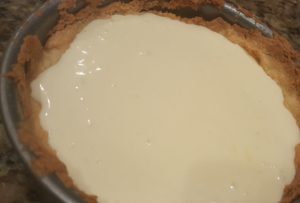 The Torte should bake for about 60 minutes or until the filling no longer jiggles when the pan is moved.  Additional cooking will take place after the heat is shut off and the pan is taken out of the oven.  In the older methods of making Cheesecake the instructions say to leave it in the oven (after it has been turned off).  I haven’t checked my old recipes but I think the actual baking time would be less.  i have the bad habit of over-baking my cheesecakes so if I looked up the old method it would probably be better for me to do it that way. 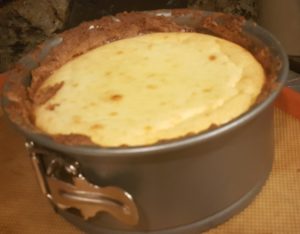 In the Baked Torte photo you can see the clasp that holds the circular sides onto the bottom of the pan.  When the Torte is baked and cooled the clasp is opened and should slide right off.  Oftentimes you may have to use a straight-edge spatula to completely separate the cake from the pan.

All in all, this Berry Torte Cheesecake was very good – it tasted delicious even if my version didn’t come out looking beautiful.  We had it for Breakfast – after all it does contain Eggs, Cheese and Fruit – items that we often incorporate into our Breakfasts.  Of course we didn’t eat the whole thing at once, so it was also eaten for Dessert at another meal.

In the photos below are the plated cake and a slice topped with Whipped Cream. 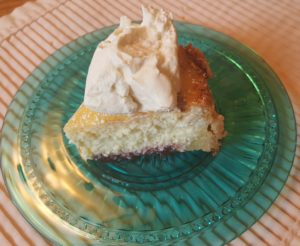 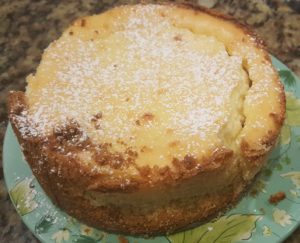 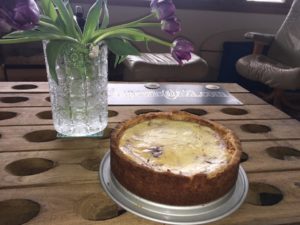 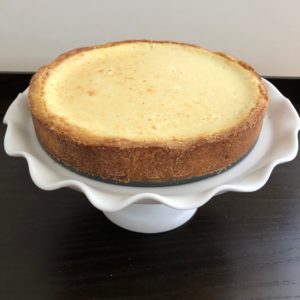 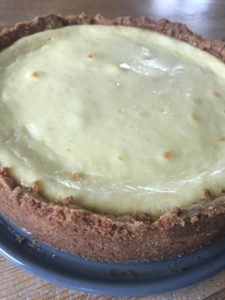 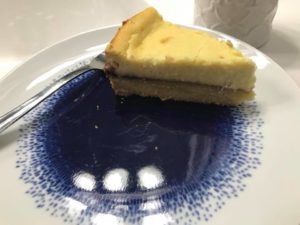